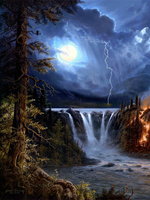 Avery is considered an expert when it comes to the game "Realm of the Elements". He knows every item, skill, class, monster, weapon, armor, spell, location, quest, everything. He's either playing the game, reading the forums while eating or sleeping. But, he can't excel in the game because he joined a year after it's release, when the majority of players joined as well. Because of that, he has always been stuck at a lower level than the high-level players. That's why he got PKed to level 1 when he accidentally insulted the guild leader of the second largest guild in the game. After that, he quit the game and took a walk for the first time in years, where he got run over by a car. When he woke up, his surroundings looked different. That's when he realized he was reborn, but something feels a bit off...
____________________
Updates on Sundays