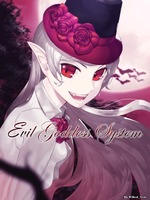 In the distant past, mana flowed freely across all the Earth. There were numerous races, ferocious beasts, monsters, and even gods. These forces put considerable pressure upon humanity, pushing their population to the lowest point in history. In an effort to save his worshippers, the God of Heaven initiated his so-called "War of Righteousness".

Many races were devastated, however none more so than the blood race. With her people facing extinction, the Goddess of Blood created the spitefully named Evil Goddess System to preserve her legacy in the worst-case scenario. Eventually, the Goddess fell, and the blood race went extinct.

Not long after the Earth was cut off from the cosmic mana stream and the numerous magical creatures inexplicably and suddenly vanished.

Tens of thousands of years passed, and humanity spread across the Earth. Finally, having sensed the slow return of the Earth's mana, the Evil Goddess System began to search for the inheritor of the Goddess's legacy.

~~The cover was commissioned for use with this novel only.~~