Falling In Love With Miracle - Teen

/ Teen / Falling In Love With Miracle 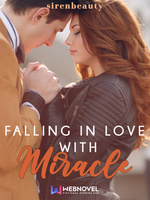 Falling In Love With Miracle

Miracle”Mira” White, is the daughter of Thomas White, one of the wealthiest men in the whole country. She can get everything she wants, because of their overflowing wealth, she is known as the wild, and spoiled brat Heiress.

Jace Dylan King only wants one thing in his life, to get revenge to Miracle, the Heiress, of the White Empire, he wants to be chosen as one of the Elite Bodyguards of the White family, since it is guaranteed he will become a millionaire, but for Jace money is just a bonus, what is important is to carry on his revenge.

Jace became confused when Miracle asked him to be her boyfriend tutor, Miracle wants him to teach her about dating, then Jace realized that everything he knows about her was a lie.

But how can he withstand the beautiful and gorgeous Miracle White? Can he stop his heart from loving Miracle the moment it registered to him, that he wants to become Miracle’s real boyfriend?

Can they resist the strong attraction between them?
Is Jace really willing to follow his heart’s desires and break his own rule? Do love wins over vengeance?