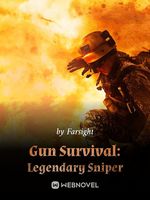 Video Games -- chs / day This is the average realized release rate over the past 30 days. The translator’s schedule is -- chs / day. 40 Chapters 298.4K Views

This was a world where games were the center of attention and where a FPS survival game had taken over the world by storm.
Maas, a college student, suddenly found out that he had a sniper system.
[The more players you killed, the more powerful your sniping ability will become!]
From that day onwards, a weird player that only used snipers appeared in the game.
…
When a well-known streamer ran into the said sniper, a bullet shot through his skull before he could even boast.
When a female streamer ran into the sniper and begged for her life with a cute voice, a single shot from a 98K broke her Level 3 Helmet and made her cry.
When a professional player with an AWM noticed Maas, he quickly ducked and kept his head low, knowing well that the moment he peeked, he would die.
…
It didn’t take long for people to come to the conclusion that the only way to defeat Maas was by picking up all the snipers on the map.
If Maas was able to find a single sniper, the victory would be his.
As long as one landed on the same map as Maas, the only way to get into the top 10 was by hiding in the corner of a house and keeping their heads low until the game ended.