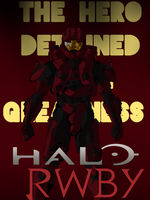 (This story is not for children.)

A UNSC freighter goes into slip space to escape an whole entire fleet of Covenant war ships, while in slip space the ship sustained heavy damage from the attack, they crash into the unknown planet and the only survivor is a Spartan named Lucas who now finds out more about his mother's past, secrets his family kept from him, he will also find love and now has to protect this new world from the The Covenant and other enemies along the way and trust me there is something more horrifying in the universe.