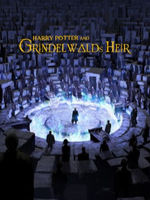 COPYRIGHT:
I do not own the cover art nor the works of J.K. Rowling, I, only own my own characters depicted in this Fan made story.
--------------------------------
SYNOPSIS:
During his imprisonment, Gellert Grindelwald has a vision and finally understands now why he failed in his endeavor. He was not the one meant to bring justice to the World.

It is the role of his Heir, of his legacy. He will be the one to bring down the muggles, les non-magiques, the no-majs, the can't-spells, the filth upon this world. He is the one who will bestow the Greater Good upon this World.


This Fanfiction is not to be copied, translated, posted on any websites without the explicit permission of the author. Nor are the Original Characters (OCs) created by the author allowed to be copied or used in other fanfictions.