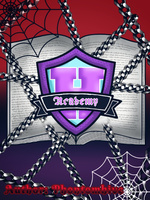 It's a nice day outside, the sun is shinning brightly in the clear blue sky. It's a great day to go to school and learn, you can hang out with friends and cheat together during pop quizes. That is... if you're attending a normal school.

Laurens stood in front of the class, his soul was slowly slipping away. The classroom he's currently in is decorated wall to wall with grafettis, chairs and tables were being thrown willy nilly. Not to mention, the teacher is currently cowering in fear under the table.

To sum up the current situation in one word, it would be "chaos". Everyone is fighting and windows are breaking, the walls are weeping. The school truly live up to it's name, "Hazard" an academy for gifted talents.

"Gifted talents, my ass!" Lauren's muttered under his breath as he took shelter together with the teacher.

"Shane, you b*tch!" Someone screamed and another window broke.

"F*ck you, Brad! You douchebag!" Somebody else shouted.

The fight continued for at least an hour and after the coast was clear, the surrounding noise turned silent. Laurens and the teacher got out from under the table. The class were now immersed in their phones and stopped fighting.

"Just take a seat where ever, preferably closer to the front so you can hide under the desk easily" the teacher advised.

"Thanks, teach" Laurens replied as he gave the teacher a thumbs up.

He sat down in front of the teacher's desk and distanced himself a bit from the others. Now, the question is "why is Lauren's attending such a barbaric school?" And to that he answered.

"It's not my choice" with a dead panned face that looked like it was holding in a lot of emotions.

After a while, the teacher started his lecture. "So, what was the immediate cause of world war 1? Can anyone answer?" The teacher questioned.

"My fart!" Someone answered as everybody broke out laughing.

Laurens could see the tears in the teachers eyes and the overwhelming desire to quite his job. The teacher was truly pityful.

"That is incorrect but you gain a point for actually answering, even though it was meant to be a joke" the teacher sighed helplessly as he wrote on his notebook and returned to teaching.

After classes ended, everyone left without a word. They didn't even try to clean the wrecked classroom.

Laurens stood there, stupified at the damage they caused. And being the responsible child that he is, Laurens did his best to fix the room. It was mostly because Laurens likes to clean, unlike "normal" people.

When he was done, it was already twighlight. He packed his things and went back home. Laurens arrived at his house, he lived in a relatively small house but it was nice since the rent is free.

"I'm back!" He announced as he entered the house, not like anyone's going to reply anyway.

The school Laurens is currently attending, Hazard, is on an island located thousands of miles away from the nearest port, so expecting company is rare. The island is located somewhere in the pacific ocean, it's a private island owned by a wealthy figure.

All students and staffs are provided with free living expenses and a mall functioned by machines to do their everyday shopping. All teachers of the school have fake names to hide their true identity, because most students of the school are influental and agressive. Mostly aggressive and the grudges they bear lasts for a very long time.

Well, aside from all the fighting and grudging. The school is quite well-off, since a percent from almost all of the countries taxes are donated here, unbeknownst to the tax payers. This School was originally founded to produce and develop young talents that can flip the world upside down for the better.

Unfortunately, people with great minds have contradicting opinions. Some are too caring and some won't hesitate to sacrifice in order to achieve their goals. These opposing personalities and mentality leads to verbal fights, that turned into physical combat and as years passed, the prestige and honor of the school plumeted and it became an infamous prison school.

To sum it all up, the school was once good then it became the worst. And Laurens, our main character, was unfortunately sent here in accordance to his parent's wishes. But-

"But there is no undoing what is done. So I ended up here in this god-forsaken island"

Yeah, what he said.

But unbeknowst to Laurens, fights and tests were the least of his problems here.