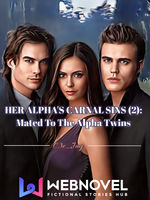 HER ALPHA'S CARNAL SINS Mine 1

~Who'd ever thought the young Alpha's son would fall in love with his nanny?!~

She was like the mother he never had, the older sister he's always wanted, his ONLY best friend.
After an incident at the Dark Risers's pack, the Alpha sends his son away to another pack to be trained and nurtured into a better person; the future Alpha.

Twelve years later, Daniel returns a full grown teen with a high sex drive and lust for beautiful women. At such a young age, he handles the pack solely and also bears the pressure of finding a mate from the elders and his relatives.

But Daniel doesn't want a mate. Never does and never will. Why get stuck with one woman who would cause him trouble than spend every night of his with women of his choice?

Will he live alone in his carnal pleasures or eat his words?

"I was a virgin. I let you have my virginity like it was nothing and this is the payback I get?"

He hated it when girls try to trap him with the fact that they were virgins before they shared his bed when they knew they were better off as impure themselves.

He didn't believe a girl could be as innocent as he imagined.

A/N: Do check down below for author's review (◍•ᴗ•◍)