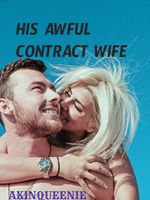 “Ms. Kim, I can't help you, your father trusts me all over the years, I just can do that. It is better to look for Master Ju or you get married before your twenty-five birthday, if not your father’s properties will be relinquished to the orphanage home,” the lawyer repeated for the hundredth time.

Mabel Kim, a twenty-three old lady was frustrated because none of those options were pertinent to her. She was so determined not to marry because she hated men. But she needs her father’s company so bad. At that moment, she was tired of working her butt for some people who will never appreciate her sweat. Moreover, the company is being run by some crazy being she never approved.

She decided that rather than getting married being the least of the option because she wasn’t aware of who Master Ju was, though she was little when she saw him last. She could only remember what she heard about her past with him. She would rather get a nobody and had a contract marriage with him and frustrate him in such a way that he would seek divorce himself and get no entitlement rather than look for a stranger who she can't remember.

Ria, a businessman lost everything to the fraudster. He had nobody except his bedridden mother. He sold his mansion and left Manjra and moved to Hagen to start afresh. But he need a job because he had spent all the money from the mansion on his sick mother. If he doesn’t get a job soon his mother may die of hunger. He was out to look for a job when he came across an advert.

He had no option to apply. When he came face to face with his mistress. He falls in love.

Will he accept to do all the laid down rules by the awful boss? What are his reasons?

Read with excitement as they both fall in love and get to know that her father’s will is actually for both of them not for Mabel alone.

The story is full of lessons, romance, love, thriller, suspense, and more