How to Taste Heaven - Teen

/ Teen / How to Taste Heaven 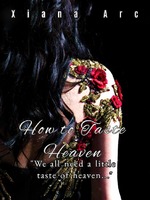 How to Taste Heaven

Following her efforts to escape their haunting past, Florence Valentina and her little brother finally in the busy city of New York after countless years of fear and uncertainty.

Just when Florence thought things were finally turning around, her life takes a drastic turn as one of the school's most notorious figures, Caleb Melle, returns.

Instead of a normal life and following her plans of staying away from the "in-crowd," she finds herself in the middle of the drama infamously known at Whitewood High. Without intending to, she becomes a notorious figure herself and angers several people who are now out to get her. On top of all that, she even tries to not fall for the cold and infamous Caleb.

With a dash of cryptic romance, school rivalries, and revenge, can Florence survive her final year or will she fall short of tasting heaven?