Hush; Let my love do the talking. - Contemporary Romance

/ Contemporary Romance / Hush; Let my love do the talking. 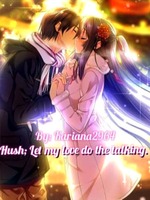 Hush; Let my love do the talking.

"How about, I pay you for every sentence you say?"


Yu Yan, being treated harshly before, had adopted a cold, silent lifestyle. Popularly, known as Ice witch, she doesn't look at strangers twice let alone talk to them.

Until she meets him, drunk as anything, he was about to make the biggest mistake of his life. To the amazement of everyone, even herself, she talks to him and even went further to help him, not knowing he was Gu Jingze, popularly called Almighty Gu.

As fate will have it, Gu Jingze falls in love with her enthralled light brown eyes. However, capturing the Ice witch's heart is not that easy. Especially when she has a lot of secrets down her sleeve.

Owning a huge company, just for styling her clothes, she also had long lists of debts to pay. She says she's poor, yet had limited edition of everything. She made the rules, she was the boss. A rich pauper, as her friends would call her.

Who knew when Yu Yan would fall in love, she'll fall HARD!!!