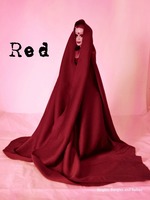 My father is a cold, hard, ruthless man. A warlord without peer. The story is told that he so angered the gods they rendered him childless. In desperation he went to the temples, offering prayers and sacrifices, finally cutting off his own right hand, his sword hand, in a desperate bid to receive an heir. The gods were moved by his sacrifice, and fashioned a child from the sacrificed flesh. The gods have apparently have a sense of humor, because they gifted him with a daughter, instead of the heir (son) he was looking for. And that's where I come in.

I've been called the "right hand" of the warlord, his "sword arm". They say it's no surprise that any weapon I touch I can wield. They have no idea the endless hours of training I've had to go through to maintain this position, my father pushing me to this point to make sure I can maintain my position and one day rule. So it's understandable that I'm sent to investigate the creature killing people in a village on the outskirts of our kingdom. What no-one expected was that it would be a creature as mythological as I, or that he wanted to be captured just as much as we wanted to catch him.

A reimagining of the classic Fairy Tale, inspired by a dream.