Read In The Spotlight online 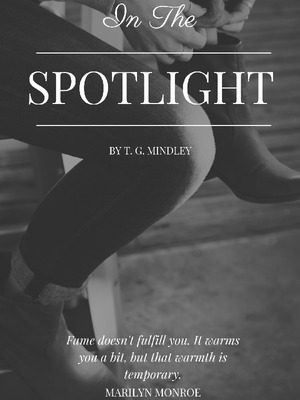 'Help me, it's like the walls are caving in

But I just can't

Shawn Mendez- In My Blood

It was relatively quiet except for the gentle sound of the air conditioner blowing in the room. The room was dimly lit by the moonlight that is peeking through the curtains. The gentle light rays highlight the scattered articles of clothes in the room from the bedroom door to the foot of the king-sized bed.

The lonely inhabitant of the room laid spread out on the bed with headphones on. The gentle beat of In My Blood by Shawn Mendez played on repeat as the tears ran freely down the occupant's face as her eyes were screwed shut. But that did not stop her mind from racing at the speed of light.

The room's occupant was none other than Katrina McNoir or widely known as Katy Noir; the international pop star. She has been in the music business since she was five years old starting from commercial jingles to now a fifteen time music award winner.

Katy has just finished her last concert for her fifth album international tour and to say she was tired was an understatement. It was four in the morning and she only just got back to her room because she had to go to an after party to celebrate a successful ending to her tour with persons who felt little to no concern to the fact that she was tired.

She had finally started to fall asleep when there was a knock at her bedroom door. She rushed to sit up and wiped away her tears before she called out to the person to come in. It was her manager Fredrick Jones who have been with her since her commercial days, he is in his mid-thirties and is liked an uncle to her.

"Hey, what's up?" she asked as she throw back the sheets and stand up.

"Nothing much. Just came to see if you are sleeping already," Fred answered as he leaned against the dresser and crossed his ankles.

"And also just now the record company emailed me about a meeting that we have to attend as soon as we arrived back in LA."

"Oh, okay. What time is our flight?" Katy asked as she walked towards the bathroom to wipe off her makeup. " Also do you remember what I asked For?"

"Yes I do, I will bring it up in the meeting. And the flight is at 11, so we have to leave at 10." Fred replied as he walked to bathroom door and leaned on the door frame.

"That early, huh?" she said as she wipe off her eyeliner than washed her face with a face wash.

"Sorry kid, but we have a lot to do so we need an early start." He said as he turned to leave, "try and get as much sleep as possible."

"Okay," she mumbled as she rinsed the face wash off. She heard the door closed as she straighten. Katy then take up the hairbrush to brush up her hair into a ponytail. When shen was finished she just stood there looking at her reflection. She saw a dark skin teenage girl with sky blue, waist-length hair and dark circle around her big dark brown eyes. The girl looking back at her appeared exhausted.

"Just suck it up, you are living your dream." She said to her reflection. She then turned and walked back into the room after switching off the bathroom light. She climbed into the bed and lay down on her side, Katy was immediately asleep because she was so drained and she had a long day in front of her.

Katy was jerked awake as bright morning sunlight shine on her. She sat up as she used her hand to block out the sunlight so her eyes can adjust to the now bright room. After a minute, she looked up to see who have rudely woke her up, it was her stylist Amber Lewis who she has become really close to over the last few years as she has been with her since the very first tour. Amber was like an older sister to her as she taught her all that she known about being a young lady and makeup.

"Wake up, you lazy bum. We have so much to do with very little time to do it in." Amber said as she pulled the sheets off of Katy and pulled her from the bed, she then pushed her toward the bathroom, "Take a quick shower then i will do your hair and makeup."

Katy did what she was told because she learned the hard way not to mess with Amber when she was in stylist mode a long time go.

It took her ten minutes to shower and dried off and by that time Amber has already laid out an outfit on the bed, her makeup kit on the table and curling iron plugged in.

"Sit." Amber commanded as she pointed to the chair in front of the table. Katy sat where she been told and Amber began their now regular routine of putting on makeup, curling her hair and getting dressed, all of that took about an hour and a half to do.

As they were finishing up Fred walked in, "Ladies, I hope you are finished because we have to leave in ten minutes or we will missed our flight." He said as he took a seat on the bed looking at his phone. "Also I ordered breakfast for you Katy," he added.

"Thank you, because I'm starving. Your monster of a girlfriend hasn't let me have anything since I been up." Katy replied as she looked at Fred through the mirror smiling.

"You should remember that I still can burn you with this," Amber retorted as she waved around the curling iron.

"Did I said monster, I mean your beautiful and lovable girlfriend who is so kind as to help me not to look like a train wreck in public." Katy smiled sweetly at Amber.

"You're lucky, you are cute." Amber said she put down the iron and plugged it out. "You're freed to go now."

Katy jumped up and practically dived into the food that was in the other room but not before she saw that Fred and Amber were kissing on her bed. She sighed, I wondered if that will ever be me, she thought.

Katy and Fred were in a spacious conference room waiting for the record company representative and her A&R representative to start the meeting because Katy just want to go home and rest. They have been waiting for 15 minutes now and still no one has shown up yet except the secretary who offered them some refreshment.

"Sorry for being late my last meeting when over." A short and overweight thirty years old man Mr. Smith, the A&R representative rushed into the room. "Let's get down to business, shall we? Katy, this last tour was a huge success so the label want you to release your new album so you can go on tour again by next summer."

"But I haven't written anything as yet. The deal was i go on this tour and then i get a year break before I release my new album." Katy objected in an angry tone. Fred putted his hand over her hand to clam her down.

"Yes, that was the initial plan but the tour changed that. We can't lose ours momentum now." Mr. Smith said.

"You can't do that it's in her contract that she can take a break in between tours and since she been on the first one she has not gotten one of those breaks. She is exhausted and she is thinking about quitting." Fred said as always the voice of reason.

Mr. Smith sat back and listen since Katy was the label biggest money maker and they can't afford to lose her.

"So this is what we're going to do. Katy will take her year break and if she wants to she will come and continue were she left off but if not this is where it ends." Fred proposed, "Also no one will know where she is just in case someone wants to revealed her location to the press."

Fred and Katy sit back into their seats as they watched Smith think over their proposal.

"We'll do that if she released a single after the first three months." Mr. Smith bargained.

"Is that okay with you Katy?" Fred asked looking at Katy.

"You sir, got yourself a deal." Fred said shaking Mr. Smith's hand.

After that was out of the way, we got down to business. We talked about the details and the legal aspects, then Mr. Smith left for another meeting. "So where are you going to go?" Fred asked.

Hi, this is my first official published story, so I hope you will all enjoy it and offer your support.

Btw, the song at the beginning of the chapter was the one I was listening to when I first wrote this chapter. I think goes really well with what I wanted to portrayed with this chapter, you can listen to the song while reading to see what I mean.

Thanks for your support.