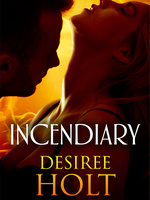 Part One
Firefighter Kristi Gregory was just enjoying an evening off in everyone’s favorite hangout, sipping her beer, when hot cop Patrick Hayes walked in. They’d just worked a disaster together that very day, and he was not only professional but one very hot cop. Patrick had eyes on Kristi but was still trying to prove himself at his new precinct. But when danger brings a sexy firefighter and a hot cop together, it’s incendiary.

Part Two
Misa turned hot and bothered when sexy firefighter Sam Braddock moved into the house next door. she could hardly get him out of her mind. Who wouldn’t want to do everything with a six-foot-four blond hunk with sculpted muscles that didn’t come from any gym, and a smile that made her panties wet? He was the stuff any woman’s dreams were made of. And she had a problem. And she wanted to have hot, sweaty, off-the-wall sex with my neighbor, king of the alphas. When he agreed to be interviewed for hew newspaper, neither of them expected the hot inferno that would explode between them.