/ Fantasy Romance / Into The Woods 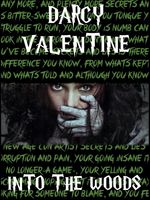 Darcy Valentine always thought that magic was just something that existed in fairytales, there were no such things as werewolves, wizards or mythical creatures. Yet, these exact terms would become her new reality after she accidentally enters the Wizarding World.

She was saved by a certain Slytherin headboy, who never in his entire life thought to save a muggleborn's life! Yet, he finds himself having a weak spot from the very first moment of meeting Darcy on the grounds of Hogwarts School of Witchcraft and Wizardry.

Soon Darcy will realise that she's far from the ordinary girl she thought she was, but she knows she can beat whatever crosses her path! Darcy managed to get through the Forbidden Forest and lives to tell her story! She escaped dangerous creatures and dodged the most ominous things lurking within the shadows. There can't be anything worse than that.
Or so she thought...

**All characters of the Harry Potter series belong to the one and only J.K Rowling, credits to her!**