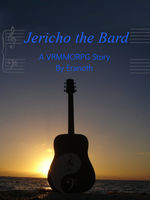 In the year 2741 Music has become a thing created solely via technology. The age of instruments had long since passed.
Jericho grew up in a family who lived ‘outdated’ lives. From his grandfather, he learned how make, repair, and play a good amount of instruments. It was his life passion. If he lived in the early 2000s he would have become famous with the skill he possessed.
The man worked hard on both his job at an antique shop and his failing musical career to take care of kid sister, the only family member he had left.
Freedom online (A very generic MMO type of name) had recently been released. One of the many VRMMORPG’s created in this era. Jericho and his sister ignored the game as it was something well beyond what they could afford.
After unknowingly experiencing both a disaster and a fortuitous encounter, Jericho and his sister are given the game with the hope this new world can bring his wonderful music to light.
New!
Discord Link to a fandom server: https://discord.gg/AAq7MMv
Also help keep me afloat: ko-fi.com/eranoth