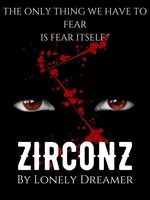 X, his real name is Xavier, had encountered many zombies ever since he joined the Emerald Fortress near Tawnia Highway. Ever since the day he lost everything from the virus, that went out of control in the 21st century, he became a cold person who tries to put on a facade, which sucks on another level. Riding the high tide was never on his hit list but it was either that or die by the hands of hungry corpses or mankind. He's gonna try everything in his power to stop humanity from dying and find an end to this virus with the help of his friends and maybe, a couple of zombies.
Five years ago, zombies had taken over the world, completely. Everything died, including humanity's hopes. No one expected the world to come to such terms, not even scientists, after all, it was they who started it. The rate of zombies seemed to increase drastically everyday, and as each month passes by, other types of zombies seems to pop out of nowhere. Creeperz, Hunterz, Hearonz and. . . . . the Zirconz.