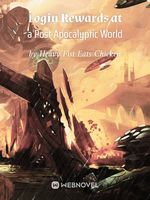 Sci-fi -- chs / day This is the average realized release rate over the past 30 days. The translator’s schedule is -- chs / day. 0 Chapter

After transmigrating over, Bick had activated a login system in a post-apocalyptic world.

There was a variety of rewards whenever he logged in every day.

Weapons: From bolt-action rifles to Star Destroyers that rampage through the stars.

But those were just the basic rewards.

Enigmatic creatures such as beautiful vampiric ladies and golden dragon mounts could be obtained through logins too!

Most importantly, consecutive logins were rewarded by huge gift packs!

There were mysterious rewards during festivities too!

While everyone struggled to survive in the post-apocalypse, Bick was feasting and drinking away.

"You were a global star? Was she a famous international model? Look at you people going hungry... want a hamburger?"

"What?! A mutant behemoth is attacking?"

Bick snapped his fingers, and a squadron of F-22s that blanketed the skies bathed it in missiles.

"He enslaved an army of several hundred thousand survivors to attack me? Emily, go turn him to your blood slave!"

Turning into bats that blotted out the skies, the vampiric lady charged towards the enemy's base.

In an instant, every enemy was reduced to ashes without the power to retaliate!

Thanks to the help of his login system, Bick was living easy, comfortable, and elegant days in the post-apocalyptic world.

The login system was that delightful!