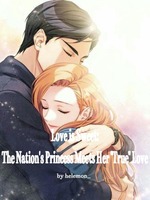 Love is Sweet: The Nation’s Princess Meets Her True Love

Excerpt:
The corners of Lu Chenjun’s lips slightly curled up into an unreadable smile.
‘I let you go once because I was foolish and I thought that was what you wanted. I didn’t cherish you and didn’t treat you well before. Now that you are back, I will definitely not let you leave my side again. . . never again.’
Lu Chenjun stared at the woman on the screen with gentle and loving eyes, ‘Yinghui, let me take care of you, spoil you, and love you. . .’
---

Just like any other romance story, our female lead Jin Yinghui was cruelly kicked out of her home at the age of 18. In despair, she left for Korea and became a successful female idol through her hard work and dedication.

Her breathtaking visuals and diverse talents earned her the title of the Nation’s Princess in Korea.

She tried her best to wipe away all the bad memories from her past and even used a different name, Elena.

Her life takes another turn when her company sends her back to her birthplace, Jin Province. In her homeland, new challenges are awaiting her. Jealousy from other celebrities and little fame in the entertainment industry of the Jin Province all stand as obstacles that prevent Elena from taking the easy path.

However, one good thing does find its way to Elena in the Jin Province. She meets Lu Chenjun, the CEO of the LIQuan Company. As a playboy, he develops an interest in Elena and asks her to be his girlfriend. Elena understands that she needs a pillar to hold onto and help her build a strong foundation in the entertainment industry of the Jin Province.

She consents to his proposal and Lu Chenjun becomes her first boyfriend.

Will their relationship remain strong or will the challenges that appear break them apart?
---
Note:
This is a slow romance novel and there are some misunderstandings that all get cleared up relatively quickly.
Update: 1 to 2 chapters daily and mass releases often
This is an original story by me and not a translation. The picture in the cover is not mine. Credits to the owner :) I hope you enjoy it!