Man of My Heart - Contemporary Romance

/ Contemporary Romance / Man of My Heart 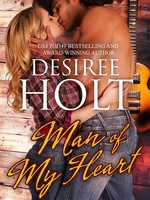 Man of My Heart

Man of My Heart
Jasmine Grey is an up and coming country rock star, just completing a successful tour opening for a top country rock group. If only her bass player, Cobra, would leave her alone. Enter Caleb Branam, former Delta Force now an agent for The Omega Team but recovering from a hostage rescue gone wrong. As the days go by the attraction between them grows more and more intense. When she returns to the road and Cobra begins his campaign of harassment, it will be up to Caleb to stop it for good and for both of them to realize what they feel for each other is the real deal. But will they be able to?


For Kari Loftin life was all about control, in every aspect of it. But she realized that at forty two she had managed to shut out every form of pleasure b y keeping a tight rein on herself. With her beloved Cubs on a winning streak, she tossed away her control for one night and ventured into the world of Petey’s Sports Bar. Little did she expect to meet a hot young stud like Riley Tucker, who showed her a side of herself she’d never dared to explore. One night together and Riley wanted more. Much more. Could Kari get past the age difference—something that didn’t seem to bother Riley at all?