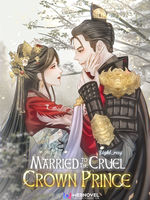 Married To The Cruel Crown Prince

Chapter 1: I am willing to marry

Juyan city was situated in the far North West of the Han Kingdom. As the territorial expansion by the Han kingdom started many kingdoms accepted the suzerainty of the great emperor of Han, Han Wenji. His son, Han Sheng Li was on the campaign since the age of 16 and now the last kingdom on his list was the city of Juyan.

In a tent house, Han Sheng Li could be seen at the center. The name suited him well as it defines his personality- Victorious, powerful, and cruel. He was getting ready for the war against the Juyan kingdom, the last petty kingdom in his campaigning list.

Five assistants were helping him wear heavy metallic armor on his upper body when General Wang Hao came there, who bent on his knees and joined both hands together. "Your highness, Juyan Kingdom is ready to accept our suzerainty. Their king, Song Wai, does not want any war." Wang Hao informed Sheng Li.

Sheng Li lifted his right hand to stop the assistants who were helping him in wearing the armor. The servants stepped back as Sheng Li moved his index finger, thus gesturing the servants to leave the tent.

Wang Hao was still on his knees, his head lowered in front of the Crown Prince, Han Sheng Li who turned to him and told him to get up. General Wang stood up and looked into Sheng Li's eyes which were giving a murderous look.

Sheng Li raised his sword and looked at it. "I was wishing for a bloody- deadly war. I wanted to kill him with my own hands but he is too easy to go on."

Sheng Li grunted in his deep cold voice which terrified General Wang because he thought that the crown prince would still prefer a war than accepting the territory of Juyan so easily.

Gathering his entire courage General Wang said, "But it will not be good if we will choose the path of the war." Sheng Li started laughing at hearing him, which terrified General Wang. Sheng Li stopped laughing and with a grim look spoke, "Since when Han generals started thinking this way. Caring for lives? You are one of my most favorite generals so I will not say anything to you."

General Wang apologized to the crown prince when General Xiao Zhan came inside the tent. He also bent on his knees, joined both hands before Sheng Li, and showed the Crown Prince a Scroll that had come from the Emperor. "Read it," ordered Xuan looking at his sword.

"I, Han Wenji, the emperor of the Han Empire, order the Crown Prince to not initiate war against the king of Juyan.

The king of Juyan, Song Wai, has offered his daughter for the marriage alliance with us. I heard the princess is famous for her beauty, intelligence, and kindness not only in the Juyan kingdom but also in the entire Han Kingdom. I have agreed to this offer. You are the crown Prince of the Han Kingdom so, I found the Princess of the Juyan city suitable for you. She will be the crown princess of the Han empire and will be the future queen.

Bring her to the Han imperial palace with due respect. Your queen mother and I have sent some valuables for the Juyan kingdom. You will go there and give yourself all the gifts to them. The Han Kingdom is waiting for its Crown Prince. Come home safely.

The Emperor of Han"

General Xiao was done reading the Royal decree, so he scrolled it up and stood up. The expressions of the Crown prince's face darkened. "My father agreed to this marriage when he knew I love someone else." Sheng Li muttered.

"I was informed by our spy that the Juyan king sent the messenger to the Imperial Han palace to give the message about the Marriage alliance to get saved from this deadly war against us. The princess was supposed to marry the first prince but King Song asked your hand for his daughter," General Xiao told Sheng Li.

"You found out this now?" Sheng Li shouted at General Xiao who lowered his eyes immediately.

"Your highness, King Song has planned this even before we reach here. The spy could not do anything about that," General Xiao explained.

"Kill the spy right away. He failed to kill the messenger in his way so he is of no use," Sheng Li ordered General Xiao who gave a bow and left the tent.

"Your highness has to marry the Princess of Juyan," said General Wang. Sheng Li with an annoying face got seated on the throne made there for him. "It is the imperial order of the Emperor, so I have to fulfill it. Prepare the horses. We are leaving right away for the Juyan imperial palace." Sheng Li commanded. General Wang bowed before the crown prince and left the tent.

After a while, the Crown prince came out of the tent. His white horse was already bought there. Sheng Li hopped on it while five more generals were behind him with a small pack of an army of 50 soldiers. There were some carts as well in which the gifts from the Capital had been sent for the Juyan King. Sheng Li started riding the horse followed by the others towards the imperial palace of Juyan.

In the chamber on the eastern side, the princess of Juyan, An Ying Lili was pacing around. The name had a deep meaning which distinctly showed her character. She was a peace-loving, kind, intelligent, and the most beautiful woman in the great Han empire. She had worn a white Hanfu dress (which Han people used to wear in historical times) with red-colored flower patterns on it. "My lady, please sit down. It is not confirmed yet that any kind of royal decree has come from the Han Emperor," the assistant Ruyi pronounced.

"The King and Queen are here," the princess heard a servant speak from outside the inn.

Ruyi lowered her head as King Song Wai and his queen entered the chamber. "Leave us alone," Song Wai ordered. The maid-servants left the chamber upon hearing the order of the king. "Father-mother," An Ying Lili pronounced as she walked to them.

"I heard that you agreed with the marriage alliance. Is it true?" An Ying Lili inquired with a worried expression.

"An Lili, sit here," Song Wai told her daughter and made her sit on the bed. "To save the people, I have to do this. To save this kingdom, I have to do this. Most importantly, to save you, I have to do this. Do you not know what murderous rampage the crown prince had made in our neighborhood kingdom? He not only killed the king and his sons but also the women there. He does not spare anyone." Song Wai stated, as tears formed in his eyes.

"Your majesty, then how do you expect he will spare my child?" the queen complained and sat beside her daughter. "He is such a ruthless person. How will you survive there? Your majesty, you have to at least think about her not as the king but as a father." Song Wai's wife, Chou Mei, said in a broken voice.

"The first prince wanted our daughter's hand as he had seen her once, but then I could never see my daughter as a concubine. At least she will be the official wife of the Crown Prince. An Lili, you will think of me as a cruel father today but it is all for you. The Emperor himself assured me that they will take care of our daughter as their own. Moreover, the emperor himself wants An Lili to marry the crown prince. This alliance will not save people from dying but also give our daughter the respect she deserves," Song Wai pronounced.

"The Crown Prince is cold and stone-hearted. Your highness, I cannot let my daughter marry that madman," the queen expressed her worries.

"My queen, I would have never agreed to this if the Emperor of Han had not assured me himself. Last month, I met him and talked about this. The emperor has given me his words and I believe him. Ying Lili will be happy there," Song Wai told his wife.

"Your highness, what if he ki-" the queen stopped speaking as she broke into tears. An Ying Lili embraced her mother in a hug and said, "No one can lay a finger on your daughter. I am trained in martial arts. I trust my father, so do not cry." An Ying Lili consoled and assured her mother at the same time. Pulling away from her, Ying Lili wiped the tears off her mother's cheeks.

"I am happy that many lives will be saved because of this marriage alliance. I am willing to marry the Crown Prince," Ying Lili announced with a tiny smile on her lips. "When things can be solved with peace then one must accept it," Ying Lili asserted.

Song Wai's eyes were teary as he sacrificed his own daughter for all this. But when the Emperor of Han gave him assurance regarding his daughter and people, he agreed immediately because, in the last campaign of the Crown Prince, the palace women were turned into slaves and courtesans. Song Wai could not see his daughter, his queen, and other women turned into slaves so he thought the marriage alliance was the best option.

"I am proud of you, my child. Forgive me for not being able to stop all this. I might be a cowardly King in everyone's eyes now, but it was the best possible way to escape the bloody war. I know as a king I should have stepped ahead with a sword in my hand on the battlefield, but even if I had done so, I know none of my people would have survived. It is many times better to see my people as free rather than being their slaves," Song Wai declared.

An-Ying Lili nodded her head in agreement. Never once had she thought that she would be married off this way, but it was all for her people of Juyan. Her father was looking helpless, as he had sacrificed his daughter for all this.

Hope you liked the first chapter. Please add it to your library and make sure to vote for it as it is a part of Webnovel Spirity Contest 2021. Your votes are the most valuable for a writer. So, please do votes and if possible leave your comments too.

Please do not judge the character of Ying Lili (FL) before chapter 60-70. Since she is thrown into a new environment so, in the earlier chapters she tries to understand the palace and people around her.

Check my Instagram for short introduction clips of the chief characters of the story.

The more you vote, the more chapters I will release.

Creation is hard, cheer me up!

SUPPORT TO WIN THE CONTEST