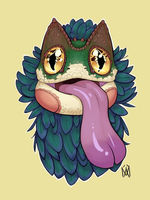 A young boy witnesses the destruction of his village at a young age by the hands of an unknown elder dragon. The boy watched as his grandfather fought the dragon valiantly, but still met his end due to its wrathful flames.

I do not own the cover. yada-yada

I do not claim ownership over any pre-existing characters, monsters, and content released in the games and books of Monster Hunter titles.