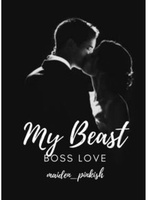 They unexpectedly meet each other in an unexpected way. Their world suddenly turns into a hundred millions of beats when they path crossed--making them to throw back the memories from the past.

Marsha Sandoval. Who had a simple and happy life. Her smiles creates long happiness, and creates a joy into her surroundings. But the fact that she had a past life in a man who's became part of his heart--when she had a tragic incident and makes to forgot her past--for having an amnesia.

But unexpectedly, he suddenly met a person. Making her life change and help her to recall her past, to recall their memories that they'd made.

Logan Figueroa who owns a company of Empire State Corporation (LFESC). Known as a billionaire, tyrannical, arrogant, selfish and almost everything was on him. His known also for being a Beast--but his manner of a beast is turns into a gentle way, especially when there's a girl whom he actually looking for so long--and when he found it, his longing heart suddenly melt again on that girl. His beasty way was faded, and as a matter of fact--on that manner--His being selfish, as he don't want to lose again that girl who's he unexpectedly met again and change his beast world.

Steven Montefalco. Who also owns a company. Prominent man who's the same with Logan for being a rich man.


But there's suddenly came another man in Her life, which makes her to choose over that two men who leave a trace on her past. Make her to choose which who she should love, and where her heart belongs for.