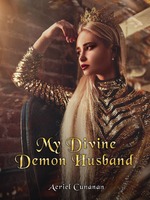 "When will the wedding take place?"

I studied the King's face as I awaited his reply. We rode side by side now, and the guards rode a few paces behind us; enough space for us to have private conversations without the risk of being heard.

"Three nights from now," he exhaled softly, and I could sense he was fatigued by the furrow of his brow and the raspiness of his words. I had always been perceptive of such things, but at a time like this, it really didn't matter to me how a Daemon was feeling.

Could an all-powerful deity really be fatigued? It's not like he was drained of his mother power as I had been. Nevertheless, he did not speak to me unless I ignited conversation, so we rode in silence for a good hour. Eventually, we reached the heart of the kingdom. An ominous, black castle was far off in the distance—the Daemon castle.

"Lords and civilians from all six kingdoms will be celebrating with us, so prepare yourself," he broke the silence.

"Prepare myself for the unnatural unification of two different species? I will do my best," I smiled.

He tilted his head and cocked his brow.

"Is it too late for me to return you to your father, or would that be a great offense to His Majesty?"


"He would not be surprised, Your Grace. The only surprise would be that a Daemon king concerned himself with whether or not others are offended by his actions," my eyes met his.


"I did not express that I wouldn't go through with it, I simply asked if it would offend," he defended; it must be embarrassing for a Daemon to be seen in even a sliver of good light.


"Well, in that case, I stand by your decision in taking me back. I am the kind of wife that would support her husband's decision, you see. Obedient—is that what they call it? I do ask one simple favor, if you don't mind," I carefully read his expression as the words of snark spilled from my mouth. I really had no control over my behavior, but before a Daemon king, it would be wiser to watch my tongue.


"Take my brother Braden instead. I may be crass, but I cannot suffer another minute in his shadow."


"No offense to your brother, but I prefer a more feminine bride, so I believe that means you're stuck here." he voiced firmly.


"Unless you have a sister?" Drakvol raised his brow again, and the corners of his mouth tugged upward ever so slightly.


I clicked my tongue—the sound audible even against the loud trotting of hooves on stone.


"Then you will be calling this home for the years ahead," he nodded his head to the castle looming above us.

~~Princess Lorelei of the Fae Kingdom is arranged to marry the demon Prince Drakvol once he becomes king of Lucem. Lorelei must revive her powers and defeat her husband before he destroys the balance of light and dark. What could a demon possibly gain by marrying a princess of light? Follow her as she unravels the secrets of her husband, tangled within the castle of the Black Kingdom. ~~