My Love For You Is Pure - Fantasy Romance

/ Fantasy Romance / My Love For You Is Pure 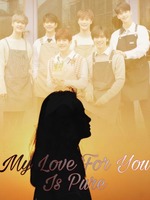 My Love For You Is Pure

But, meeting them, chatting with them, becoming friends then being proposed, is only happens in novels or fanfictions.

And it all happened to Aroha, in real life.

But what will she do? Will she also fall for one of her idols? Or, she will be able to uphold the pure love fans have for their idols?

A fan's love is supposed to be purest, it doesn't have any expectations, neither have desire. The only thing it long for is, happiness and success of its idol.

So, will she able to void herself from temptation of romantic love, and remain as true loyal fan?

let's join Aroha in her journey to unfold events, that led her from an ordinary fan to become the top fan. Or more than a fan...