My Love, You Will Never Escape From Me - Fantasy Romance

/ Fantasy Romance / My Love, You Will Never Escape From Me 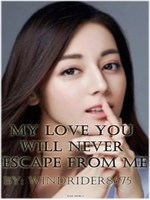 My Love, You Will Never Escape From Me ML,YNEFM

Two people were once linked by business marriage. Dilireba who was once innocent and turn cold because of him.
3 lifetimes and 2 deaths.

Yo! This is not your typical romance.

Ever heard of a devil? Ever see one? Well, Dilireba certainly did. Ever since Dilireba has met Deng Lun her life turns upside down. Being forced to marry him was like a nightmare. But she finally awakens from the nightmare and from his grasp. But is it really? The answer is yes and no. Yes because he no longer can bound her to him all the time. No, because he was chasing after her and always around her. Like a stalker? Yup.
However, she is constantly having a dream of two men and possibly her past self? However, thank goodness that her childhood friend is getting her happily ever after and he is coming back. Now divorced, she is no longer the same. Innocent and childishly pure? Nope. It's cold, savage and a badass, at least towards outsiders. It is time for her to turn this around especially when she finds out her hidden identity or should it be identities? And is everything she originally think is really real?

[We don't even have the most basic trust for each other, how can we go on?] - Dilireba

[I believe in my eyes and my abilities] - Deng Lun

[I have waited for you for so long, but I'm willing to wait longer for you so that you can accept me.] -Bai Jiayu

[Now that I recovered some parts of my memory back, wait for me Ah Jiu, no Reba... wait for me ...my rightful queen.] -Bai Jiayu

[Bai Jiayu... where are you? Why can't I get any news on you? Why did you disappear?] -Dilireba

This story contains heartbreaks and contains barrels and barrels of vinegar as well as fluffy chapters~.
It's a make-believe story between Dilireba, Deng Lun, my creations, and many other celebrities.
But Father Deng's name is really a coincidence...
The story will also have a mix of the Chinese drama, 'Ten Miles of Peach Blossoms'