Reviews of My Rich Wife by Taibai And A Qin - Webnovel 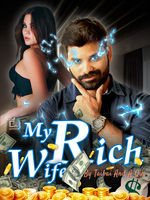 The title is kinda misleading. This is a bad face slapping novel. There's almost no romance in it. The story consists of, a young master looks down on you, a fight happens, face slapped, then cultivating, rinse and repeat. Moreover, the looking down is unreasonable, the face slapping is not satisfied enough sometimes even spared his enemy, the cultivation is extremely common. Do not waste your time on this.
3d
view 0 replies

Does anyone here know the chinese name of the novel? I want to check the raws because some sentences doesn't make sense to me. I'm kinda doubtful of Nyoi-bo studio.
4d
view 0 replies

I had high hopes for this novel, but as I kept reading (until chapter 230) I got more and more frustrated with the constant face slapping, young masters who are more arrogant and entitled than the Son of Heaven, and rampant two-faced corrupt characters at every turn. The MC is supposedly 30 years old, but behaves like a teenager, and there's a ton of unnecessary drama, which have no meaning to the plot. In time I just got fed up with the constant corruption at every level, and then having the MC pull a deus ex machina to get out of trouble by involving his girlfriend. This story is like fast food - feels okay to read a couple of chapters, but after that you quickly get tired of the rehashed and repetitive corrupt, entitled, arrogant, and ego-centric characters who are more shallow than a piece of paper. And don't get me started on how everything is solved with violence at every turn in a modern developed society. One thing I learned when reading this joke, is that corruption is rampant in China and everything is solved by oppressing the weak. In short, trash story with no character development, 2d cardboard copy characters, repetitive non-sensical plot. 2.4/5
7d
view 0 replies

God this novel is bad first the constant changing pronouns he/him to she/her make it hard to tell who they are talking about this alone i could handle but the way the MC never kills anyone before they can return and cause more trouble is infuriating. It really is just your typical Chinese face slapping novel.
29d
view 0 replies

The history is very interesting! It's cool to watch gg (although sometimes it infuriates with stupidity). Of the shortcomings, too long up gg
1mth
view 0 replies

Interesting storyline and characters. Always looking forward to the continuation of the story everyday. Can't get enough of it. Great job to the worst.
1mth
view 0 replies

The author should change the title from "My Rich wife" to "When will she be my wife?" The story is cliche what's worst is all of the villains are 'progressive villains' where when the MC defeats the enemy the uncle, father, butler, friend, etc. of the enemy will fight with the MC. So for like every chapter, there is a new antagonist that wants to kill the MC. The wife or supposed to be wife, after she left the MC to return to her hometown has very little screentime. I thought the novel will focus on the relationship between the MC and his wife but I'm at chapter 600 and they're still not with each other. when the MC will save the heroine from the cliche arranged marriage you thought they will be together but a big slap from the author will come at you TADA! The "wife" will be imprisoned by a new antagonist group. So the title should be changed. #MyRichWife@Chapter1230 Don't get me wrong even if the story is cliche it's a good waste of time if you don't have anything to read.
Reveal Spoiler
1mth
view 3 replies

to put it bluntly. it's absolute trash. don't be deceived by name and synopsis. it's just another Chinese novel with lots of young masters and face slaps. author says mc is 30, but mc acts like a 16 year old teenager. As far as the character development. what characters? apart from typical mc everyone is just the default typical young masters. almost all characters and sometimes even the names are the same. author deliberately tries to weaken mc every time. you can find this in almost every Chinese novels and most of them do a great job if they are all same. idk why this has so many 5 star reviews but many novels are doing better job even with same young masters face slaps. long novel short - mc has treasuure trove of knowledge left by his father. - mc didn't have strong allies but ridiculously strong enemies. - expect a young master face slaping almost every chapter and for no reason - mc has plot armour and power of will. - the end
1mth
view 0 replies

I find the translations to be directly translated, some sentences do not make sense. Also I think the translation is a bit rushed, which I do not mind because I would like get to the conclusion or end of the book/story. The release of the chapters is also a bit slow, I'm not sure if there are 2 chapters per day or per week being released?
1mth
view 0 replies

I love this novel very much.... and I hope the updating of the chapters will be frequently... I can't wait the chapters upcoming... its really lazy while updating chapters.....
Reveal Spoiler
1mth
view 0 replies

I really enjoy the story and it would be almost perfect if it wasn't for the mc constantly forgetting to do certain things. mc promises to train soldiers and forgets. mc promises to teach cultivation to Lance in a week and it never happens. + a few more.
1mth
view 0 replies

Writer has done a good job , story is interesting , sometimes boaring overall it's a good and funny story . I loved it from the beginning to the end.
1mth
view 0 replies

when I read the synopsis, I guessed that it'll be a face-slapping novel. but never would I have thought that it was in a literal way. the MC has been slapping people faces left and right. 😅😅😅
2mth
view 0 replies

Awesome, at 1000 chapters, could easily have 1000 more. So many different plots and characters. The equation for these new plot lines in the story does get somewhat tedious, but at least they’re all original. Also great that something that is scene and heard from like chapter 100 will come back with SOME details at 600, and then becomests full force plot line around 900.
2mth
view 3 replies

I am at chapter 149 and I dropped it. It's not because it's super bad or something but because at 149 there is still full of face slaps, like after this idiot there will be another idiot and again and again.... And for me the plot development stagnates. I feel no development in the world, he is still the stupid guy in the eyes of everybody.
Reveal Spoiler
2mth
view 0 replies

I really a nice novel. Though I've not read much I can say that it has new concept than any other modern, wife, cultivation novel. [img=faceslap]
2mth
view 0 replies

I'm enjoying this book so far. I will continue reading as more chapters are avalable for me to unlock. Although I am reading several stories at the same time.
Reveal Spoiler
3mth
view 0 replies