/ LGBT+ / No Rulebook for Flirting 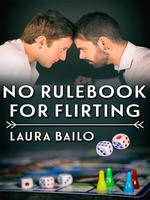 No Rulebook for Flirting

When Gabriel goes to the annual gaming convention, planning to play as many games as he can during the next three days, he doesn’t expect to be glared to death in the parking lot by a really cute guy. So when the same guy joins the game Gabriel is playing, Gabriel is determined to make him smile, even if it takes some awkward flirting.<br><br>When Aitor makes it inside the convention center after someone steals his parking spot, he doesn’t expect to be so attracted to the man he decided to hate just a few minutes earlier. But as he gets to know Gabriel through gaming and flirting, he just can’t look away.<br><br>The game of flirting has no rulebook, but for Gabriel and Aitor, it may just have two winners after all.