Our Dreams of Freedom:A Tale of Two Adversaries - Fantasy

/ Fantasy / Our Dreams of Freedom:A Tale of Two Adversaries 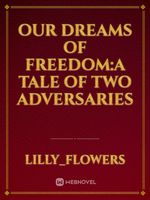 Our Dreams of Freedom:A Tale of Two Adversaries

Amarion Adams knows what it means to be part of a minority. He also knows what it's like to stand out from the crowd and be forced to conform to the majority, a method known as "not rocking the boat" or "breaking the peace". Being bisexual in a devout Christian family and backing down from challenging blatant homophobia.

Being Black in a white worshipping society while fighting against oppression or submission from a world that doesn't value your worth.

Being an Elite,a humanoid species seen as an Aristocratic Race for having rare, innate powers or talents recognized from early childhood that aren't present in humans.

Amarion has always been in a constant battle defending who he is and has never backed down from the people who tell him to sit down, shut up, and accept that he won't earn respect for being a minority in every sense of the word. Growing thick skin and a desensitization of the ignorance that plagues the world he lives in is nothing new for him. Amarion isn't fond of being in a never-ending battle, but he knows that his persistence for the progression of society won't die in vain.

This all comes to a head when he comes out of the closet as bisexual to his oldest brother,Jonathan. Amarion knows that Jonathan is homophobic and he most likely won't accept his sexuality with open arms, but Amarion won't go down without a fight. With his safety, security, and mental health all on the front lines, Amarion chooses to come out of the closet anyway.

He knows the possible risks he faces at the hands of his oldest brother. He is fully aware that coming out is never easy, but neither is pretending to be something he is not. Amarion would rather be bisexual and be hated for it his entire life than be straight and given fake approval from people who rather show unconditional love. Life would be torture for Amarion having to live it as someone else, especially knowing he would be more desired and loved that way than the way he is. His sexuality may pose a threat to his life due to homophobia, but not as much as repressing it due to self-hatred. Jonathan may be stubborn and unrelenting in his views, but Amarion is just as stubborn and unrelenting in his own...if not more than his brother. The unwillingness to either give up or give in causes friction between the two of them.


What happens when two sides of the same coin can no longer coexist as one anymore?

What price will Amarion pay for a taste of freedom and acceptance?

Can love truly overpower hate in a world where hate claims most of the good the world has to offer...including the people who embodies those characteristics?

Will Amarion be able to fight for his Dreams of Freedom?


Find out in Our Dreams of Freedom:A Tale of Two Adversaries!