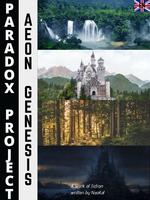 The first project focusing on four protagonists within the same world set around fictional 14th-century Europe.

The Sin of Innocence:
Axel, a naïve boy desiring to be a famous blacksmith in Western Land until a misfortune happens, forcing him to abandon his dream. He has nowhere to go as the corrupt church declares him a heretic, while an evil organization desires his power. Now, he has to carry on and endeavor to prove his innocence, making and losing both friends and foes in the process.

The Lord of Servants:
Vixon, a strong-willed common-born boy desiring to be a king to bring peace upon Western Land. He lives in poverty and fear because of the emperor and nobles from his kingdom. Fortunately, fate has given opportunities for him to reach his ambition by starting as a front-line soldier. He has to face countless trials and tribulations in his way, forcing him to choose between his ambition or his comrades.

The Arrogance of Humility:
Luxianne, a powerful and talented magus who had a perfect life, until misfortunes happen, causing her to lose everything. Instead of abandoning hope and falling into despair, she continues living, grasping upon an illusionary hope. Now, she lives alone, wandering and struggling to find peace, love, and happiness in the outside world even though she knows pain and sorrow await.

The Vice of Virtues:
Alexander, a warrior fully clad in a pitch-black armor known as Dark Knight and Death’s Hand. He serves under the emperor’s command as an executioner. Unknown to others, Alexander dislikes violence. The reason he keeps doing his job because the emperor promises to keep his mother safe while helping him to find his lost father and sister. But Alexander’s starts losing hope in the emperor's words as he began to unravel the truth.