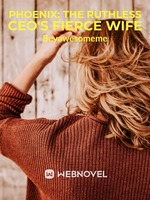 Ru Lan is a 24 year old neurosurgeon, she is known as a genius among her peers and she is the queen of narcissism, she loves her self and sees the world as her playground, but no one knew been the chef of neurosurgery of her hospital is one of the many identities she has.

Codename: Phoenix She is a force to be reckoned with and criminals dread the day they meet her. Her feisty attitude makes her a lot of friends and she is always a winner.

And then she meets Jason, the CEO of FYN group, Ru Lan has never seen a man so well made and she will do anything she can to make Jason hers but little did she know that Jason has the same plans for her. i've finally found her he said,when he met her for the second time.

But like they say, every heroine needs her personal hero, that's why we have Li Jaesun the cold and aloof CEO of the multi conglomerate FYN GROUP who has taken a liking to Ru Lan.

I must have her he said, whateverı it takes, watch out girl coz here I come.

I must have him she says, he's my prince charming.

Join the journey of Ru Lan and Jason as they conquer the business world and underworld.


This is an original story.

5 chapters weekly or as much as I can write.

Do leave reviews and comments when you read let me know what you think.

Cover photo, not mine.