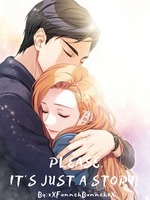 “Did anyone ever say you’re a bad liar?" His penetrating gaze never left her.

Elaina shivered and didn't dare look at him. She felt that if she looked up, she'll lose the confidence she had. But if she continued to look away, the more sure he was that his assumption was right.

The dinner was already stressful and now that he found her real identity, he won't let her go so easily. She had been deceiving him from the day she heard him say 'find the author'.

"Elaina Tan, which are you?" He asked, not taking his eyes off her and continued "Are you my executive secretary, daughter of the famous designer Alta, a famous comic artist that published Detective Izumi or the granddaughter of the famous Glowne family?" His tone was cold but had a bit of playfulness in it.

The amount of regret Elaina could go on forever. She should have said no to the blind date and look where she ended up at now. A dinner night with the devil himself.

He suddenly got up and it startled her and she unconsciously looked up and met his dark midnight eyes. The sight left her in a daze, as he approached her. She couldn't take her eyes off him.

He trapped her between his arms and brought his face down to the dazed Elaina. "Well it doesn't matter whoever you are." He continued "At the end of the day, you'll be Ms. Lee, wife of Kazuki Lee," and he gave her a kiss on her cherry like lips.

Elaina looked at the man with wide eyes. Why does she feel that she suddenly walked into something that she couldn’t escape? Maybe in fact, that she probably had long fallen in his trap.

"Even if you hide, you can't escape a Lee. Just know that." Kazuki’s faze never left her watery eyes.

I’ll always update 1 or 2 chapters on Wednesdays and Sundays.

The cover is obviously not mine and the original cover belongs to the one who made it.

Also I’m a new writer! So please support me and help me with my clumsy mistakes!!?