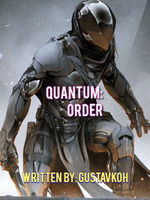 Chapter 1: And He Knew Why

In the middle of space in the Pamini sector, looking out the window in The Hawk Windy ship, the newly accepted student at the Foundation Academy, Akin Damijo, was thinking about his old home. He was sitting on his bed, admiring the stars. He had studied about many of these constellations, from Pravani to Taman.

The boy had dark skin, a little dreadlock hair pointed up on his head like wooden stakes, brown eyes and didn't look to be more than eighteen years old.

They were headed to Foundation Academy, the most prestigious college in the galaxy. There, more than fifty percent of soldiers with highly qualified skills have been formed. Not just soldiers of course, but technicians, gunners, pilots and various others. The academy was founded by Hanum Gab'bb, a male Ciprian from the planet Cipri not long after the first Catoq wars. Now, the academy had Jadellye Hamej as its principal. She was a human from a colony in the planet AK-1235-P, born twenty five years prior to the Great Disaster. Akin studied all of this back on his adoptive parents planet, Derrvun. He and his adoptive sister, Yag'geh, would challenge each other to see who was the most intelligent.

Akin won all the time.

Turning around, Akin faced a purple and skinny girl, with a curly black hair and yellow eyes standing in front of his room's automatic door. It was Vantner, his friend and roommate.

"I was just thinking about home." Akin said.

"Well, you'll have plenty of time to think about Derrvun and your family, but right now Captain Sonomott has been calling us to the training room." She said nodding.

But he did not have to say it.

"Good," Akin said. "I wanted to do some training anyway."

As they both went to the training room, the boy passes through the room of several other students, all of them headed to the same place. He sees some of the soldiers who were still on the starship preparing themselves to go one more time at the Aaroine system, the current place where the Catoq wars are being fought.

After five minutes of walking, all the students of the 6th class were present at the main location.

"Attention!" A harsh and strong voice echoed through the now full room.

Captain Felix Wander Sonomott is the youngest of all the captains currently alive and still working alongside the Galactic Foundation of Catoq. He is known aboard The Hawk Windy ship especially for his cybernetic prosthetic left leg and right eye. Both lost while fighting at the Catoq wars back on his home planet. He also has one blue eye and a blond but messy hair, and a very small but badly groomed beard too. Recently, he had been put on charge of Akin's class training. He wasn't very happy about it.

"Soldiers," he said stopping for a brief moment to cough. "Today we're going to learn two different and important things. So I suggest you all shut your mouths." The room went quiet almost instantly.

"First, you're going to learn how to use your jadaronian energy pistol. No one wants to get your face blowed up because you don't know how to charge it correctly." The Captain said smiling. He probably wanted it to happen to someone.

"And second, you're all going to practice some of your fighting styles, from Jiu-Jitsu to Judo. That is the only thing humans are recognized and known for in the Foundation's records..." He said but then suddenly stopped.

"That... and another thing." The room went quiet again, everybody at the training room aimed their eyes at Akin, including his own friend Vantner Mywolp.

Galeg Jipriani, a Athorian, was looking at him with disgust while trying to hide a little smile.

And he knew exactly why.