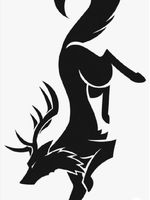 Reincarnated As a Horned Wolf By A Shitty God

"Ryan did you get anything good," asked his partner as he woke up.

They were currently in a small tent surrounded by snow. Their job was to film wild wolves in Minnesota.

He shook his head "No nothing good happened since they've been asleep this whole time".

Ryan and his partner had been in the wilderness of Minnesota for about a month capturing the life of the pack, for National Geographic's.

They had 4 days left before they could return and he was excited to go to a bar and get a nice beer since they had run out of alcohol a while ago.

After a few hours, the pack's hunters began running off and after an hour of moving, they found a herd of Elk. Ryan and his partner had been following the back by car. When they caught up the wolves were cornering a mother and her calf.

"Hurry up Dan start filming," he told his friend.

They got down from the car and got closer. After filming the whole scene they began walking back towards the car. They both stopped when they found a 2 Grey Wolves snarling at them.

Ryan listened to him since it was his first trip filming and this was his first face to face confrontation. He was scared as hell as he saw the fangs on the wolves snout.

He looked closely at the Wolf directly in-front of them and recognized her, "Misty come on girl, just get out of our way and let us go through".

"What the hell are you doing, she's not a dog you know", yelled Dan in a low tone as he brought out a long knife.

Ryan was shocked "you're not going to her are you?", he asked.

"It's her or us," responded Dan with a shrug.

Suddenly growls were heard from multiple sides. Ryan turned around and found another 4 wolves surrounding them.

"Don't worry everything will be fine," said Dan in a reassuring tone.

As he was about to turn around he felt a stabbing pain in his leg. He immediately fell rolling around in pain. When he looked at his leg he found that he was bleeding. He quickly scanned for Dan and found him moving towards the car swinging the bloody knife around and scaring the wolves that got near him.

Ryan could see as the wolves lost interest in Dan and looked his direction growling and preparing to pounce. Ryan looked at Dan as he was getting in the car and yelled "You son of a B**** you're going to rot in hell".

Next thing he knew he was being dragged in multiple directions, feeling his flesh getting torn apart. Slowly his conscience began to disappear until he couldn't see or feel anything.

After an unknown amount of time, he was blinded by a bright light. When his eyes adjusted he found himself standing in a white space in front of an old man sitting in a throne.

Ryan was shocked and couldn't say anything. After a few minutes of silence, the man gave an annoyed look and yelled.

Sup ill be adding the second chapter in the weekend. Let me know how you liked this chapter, It's small but important since its what will decide if I'll keep y'all as readers lol.