Remember Back Then - Fantasy Romance

/ Fantasy Romance / Remember Back Then 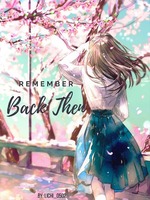 Remember Back Then RBT

"Are you sure about this?" he asked. I nodded. We knew the risks of this plan but it was the only way to save everybody. This was the most that I can do in return for everyone who sacrificed their lives for us.

"You look nervous," he said. And deep down I truly was, but I can't let my fears take over the best of me;

"Promise me something," I said. "Promise me that you'll live." He looked down at me and gave me a weak smile, but it was still a smile nonetheless.

In the year 3033, humanity was on the brink of destruction. After facing off against the countless waves of natural disasters and virus outbreaks only 7 million out of the 7.5 billion people survived. The world we once knew was then split up into 3 empires, and each empire was under the jurisdiction of a noble family. The De Winters ruled over Lemuria, The Pendragons controlled Avalon. and lastly the Arie’s looked after Nirvana. There was a great feud between the 3 empires about land and resources, so eventually war broke out. Each empire started to create weapons of mass destruction more powerful than the others and that’s when things started to escalate. Millions of innocent lives were lost but despite the bloodshed, the war continued. It wasn't until each of the empires ran out of resources that they stopped. But even then, the peace didn’t last very long for the empires had created even deadlier weapons. No. They weren’t weapons because it was something far worse. They had created monsters, and I was going to be one of them.