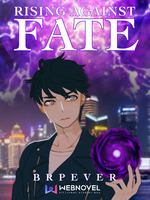 Drake, whose life was filled with tragedies, finally found happiness in the form of his lover. But fate couldn’t bear to see his happiness, so it took away from him what he cared the most.

Unable to bear it, he commits suicide, but things don't end there.

He gets reincarnated and the cycle soon starts repeating itself. So this time, he gave up without even trying.

However, when he turned 13, he realized something was different. People used to call him poor, unfortunate, or even miserable. But for the first time in his life, someone called him lucky. He found out that he had the strength to resist.

Follow him as he uses his newfound strength to raise himself against fate and tries to reach the point where even fate can't touch him.
----
Release:
#At least four chapters a week and a bonus chapter per every 500 powerstones that the story gets. Also, daily updates will start from the day we reach 1000 stones.
----
Discord: https://discord.gg/NChfKfz
----
Thank you Ainz, Dragon, and Sento for listening to my crazy ideas and everyone for the help, tea, sofa, and sympathy.