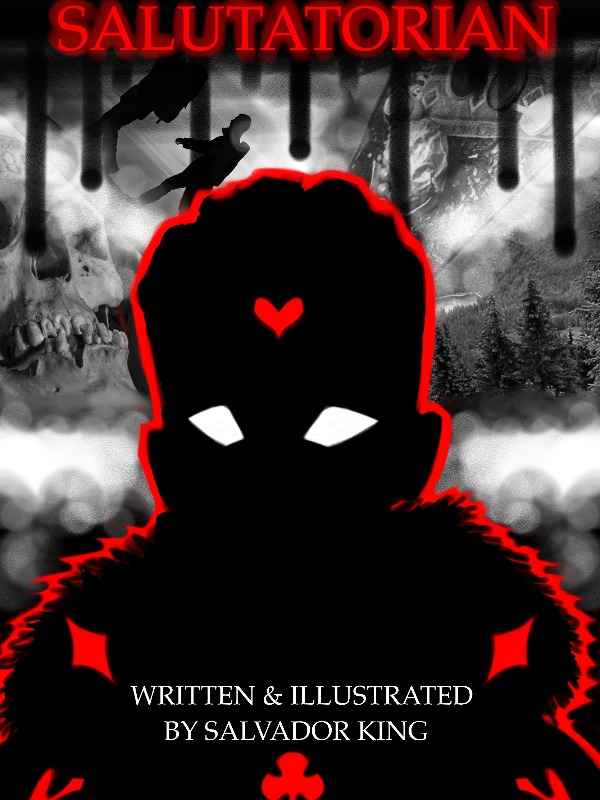 The moon, my night light, helped through the night as I searched for something, this something was taken from me by someone. 'How did they find me?' I thought. I never shared my location with anyone or let alone anything, unless they don't speak. It was cold and windy as I walked through the trees, I knew they'd be cold but I wasn't. I've been living high up in the mountains for a while now and I got used to it. Although I miss wearing my everyday t-shirt, I had to keep it underneath my layers of clothing. Branches cracked towards me, I was close to my victim and they didn't know it.

I crawled on the ground, not making a sound, preparing my sniper. Now I got a better look at this thief. They were slim, average height, long brown hair, wearing a dirt-covered top, and ripped jeans.

I'll admit, they were in perfect shape and my type, only thing was...they stole something from me. A very bad first impression and I knew it was time to get this over and done with.

I focused my eyes on the target, no movement detected, injured leg, and cold. 'I'll miss you, dumbass.' And like that, they were down, drowning in a pool of blood. I walked over towards their body, "I would've spared you, just to let you know, but you stole from me and found my base...so?" I shrugged and laid beside them, gazing at the stars. "It's been a while since I've seen anyone, been up here for about 3 months now?" I faced them, still breathing, and very alive. I didn't want to kill them, yet, just wanted to know them first!

"So, what brings you to the mountains?" I asked in a joyful tone. They stared at me, afraid of what I'll do to them since I was hunting them and I shot them. Tears began to fall along their cheek, whimpering they asked "W-what do you want? I-I promise I was going t-to leave! I'll never come back, I s-swear!" I tried to be respectful and covered my mouth but my laughter was too strong. "I mean...of course you were going to leave, it's what thieves do!" They started to shiver as I held their face in my palm. Rubbing my cheek against theirs, I pulled out my knife, unnoticed, "And your last words are...?" I sang.

"I'm sor-" I stabbed them through the neck before they could finish their sentence. 'Again?' I growled, at their dead body and picked up my stolen item, what I came for in the first place, my water bottle.

Who would think? Someone would risk their life for my water bottle? I put my water bottle against my face and smiled, "Don't worry, you're back where you belong!" There was a moment of awkward silence, bushes moved by the wind, and a nice cold breeze. I turned to my water bottle as my smile turned into a frown, "You missed dinner." I complained. "But I left you some leftovers because I'm a nice person that doesn't leave people!" My attempt to strangle the water bottle failed, they were too strong for my gloved hands.

"I hate you, Como," I said towards the water bottle. I tried to drink from Como but, instead, I just got water all over my face. 'I keep forgetting I'm wearing a mask.'

I looked up, the clouds started to crack and rain poured down. I put Como in the side pocket of my backpack. Following my steps, I walked through the rain and picked up some wood on the way home. Wet and cold, I quickly opened the door, rubbing my bulky shoes on the mat and placing them on the side. "I'm home!" I yelled. Shaking off the rain from my jacket, I walked over to the chimney with the collected wood and lit a match. Eventually, the fire started and the living room began to warm up, I sat on the couch and heard footsteps from upstairs come tumbling down. It was a dog!

A young husky wearing a fluffy coat, I forgot why I put that on them, especially when they're already so fluffy. The dog jumped onto the couch and covered me in kisses, "Yes, yes! I missed you too, Alanza!" I giggled while petting and cuddling her.

"You hungry?" Playfully, she nods in response and dashes over to the kitchen. I bring out a disc and play it on the polyphonic music box.

Roses from the South; by Johann Strauss II

Roses from the South,

Their tender petals washed with dew

Will tell of all my love for you.

Where the wood doves croon

Soft as the breeze,"

I started to dance around the kitchen with Alanza, as I grab ingredients from the shelves. I brought out a big loaf of meat and tied it with string, a bit of seasoning here and there. Straight into the oven as I set it to cook for 30 minutes! Alanza and I began to calm down, listening to the music, and waiting for the loaf to finish. After a few minutes, Alanza decided to take a nap on the couch while I waited.

I swiftly walked over to the oven, put on some mittens, and took out the meatloaf, leaving it to cool. As the loaf cooled, I made some potato salad on the side and prepared some nice treats for George. I was finally alone with nothing to do or anyone to feed, I began to dig into the meatloaf. Only thing was...I didn't know how to cook meatloaf, I wasn't sure if it was cooked or not but I still ate it because I was hungry and left some in Alanza's bowl, for when she woke up from her nap.

The loaf wasn't bad? I did something right for once! Each bite was full of flavor, making my mouth drool in excitement from the smell alone. I finished up and had tea before bed, sitting on the couch beside Alanza, creasing her soft fur, and watched the wood burn underneath dancing flames. It was warm, cozy, and quiet, at last, I could finally rest after the wild goose chase. I miss having people over and seeing my friends, which I can barely remember, but there's a reason I moved to the mountains. It was for silence.

The warm and gentle touch of the sun's light awoke me from my slumber. Ever since the apocalypse and all the zombies I've been able to sleep without any nightmares, it was unusual but I was thankful, I haven't had any good sleep since I was a 5 year old!

"Ah yes, sunshine," I groaned. "Time to get ready." I was off, jumping out of my bed and heading for the bathroom. The door swung open as I walked over to the sink and brushed my teeth. Just because it was the 'end of the world' doesn't mean I wouldn't be unhygienic. "Bork," Alanza growled, she was always a grumpy head in the morning. "Morning, Lanny!" I cheerfully smiled, rubbing her cheeks. "Ready to go run some morning laps?" Alanza whimpered, escaping my grasp, rushing for safety. I laughed at her clumsy and tired escape, she was lazy for such a big dog.

After that, I began to pack my things; spare clothes, ammo, foods, medical supplies, and dog treats. I'm going on a trip today! To Melbourne, in the city, for a special medicine I need for my condition, they're called 'Happy Pills'. Mainly used on people with depression and other related mental issues, which I have, to help them feel better. I ran out so I'm a bit unstable...hopefully I won't run into anyone on the way! That'd be very...unfortunate for them.

I finished up my breakfast, locked Snowflake inside the house with a yearlong supply of bunny food, and called for Alanza as I walked to Rebecca, parked outside. The sun was bright and the light almost made me blind, walking into light after being hours in the dark wasn't the best idea, my eyes adjusted, and continued walking.

Alanza sprinted past me into the back seat of Rebecca, she was excited to finally leave the house, after so long! Alanza howled louder than the wind, telling me to hurry and I did. Putting all the supplies in the trunk, I slapped the door closed and entered the car. Finally, I awoke Rebecca from her slumber, she growled and Alanza barked in response. Slamming my foot onto the peddle, we were off.