Reviews of Scion of Time Gaming System! by Lazy_leon - Webnovel 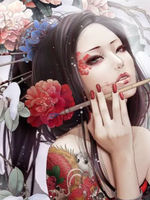 I saw that this novel didn't have any "real" Review so I'm making one to help you chose whether to read it or not First of all I'm only at chapter 54 so I may make a new review later Pros: 1-There will be 7 girl in the harem or something like that (it may be a con it depends on what you prefer) 2-The MC have a space and time affinity so he have space and time ability which are really badass (he can gain ability when he lvl up and can lvl up his ability) 3-the MC isn't completely stupid (but I wouldn't say that he is smart either) 4- the world has a lot of potential even though it isn't really original the author describes it well in my opinion but there is still a lot of mystery and things we don't know about the second world (even first world we only know about the district where the MC live but the world look really interesting) 5- the system is nicely done and the reason for the XP gain and lvl up is really good compared to other gamer system 6- he won't leave any of his woman behind and all the women will be important for the story (the author confirmed it himself) 7-no ****** (it can be a con for ****** lover lol) 8- there's only a few grammar mistake (I find the grammar above average compared to other work on this platform) 9-the MC become more ruthless later on (I suggest you to read till chapter 48 at least) 10-the R-18 chapter are great Cons: 1-this is a harem (this can be a pro and con it depends on your preference) 2-till now (chapter 54)the MC's relationship with the girls isn't that deep (there's way more smut than romance so it may feel like the MC just **** a woman and directly go to the other but the author said that he will try to balance the romance, action and smut) 3-super mega duper incredibly strong plot armor (not in a fight but with the girls) 4-the MC isn't stupid but sometimes relie too much on the system in my opinion 5-no ****** (it can be a con for some ppl) 6- the MC can be somehow naive sometimes 7-cringe alert So in my opinion I wouldn't say that this is a masterpiece cause the storie still have some flow and isn't that original but I still think that that's a great novel and a lot of ppl wouldn't regret spending their free pass and coin on it (I suggest you to read at least it chapter 48 cause I find chapter 43-48 the best so far there will be a lot of explanation and action) Chika gif cause she's the best girl:
1yr
view 23 replies

I made it through chapter 7 and had to stop. One of those chapters was filled with the thought of the MC as he described a pretty girl fighting. That was the entire chapter. Not once did the thought of using his ability help her cross his mind until he was personally in danger. Even then, he was angry for the being 50 levels above him daring to try to hurt him. This was all after he talked about cliche MCs being all cocky and arrogant for no reason. If you don’t like the cliche MC being arrogant immediately after receiving his cheat then you will not like this.
Reveal Spoiler
2mth
view 0 replies

hello, good book, I wish it was in Spanish or I could change several languages, I love reading, only English is difficult for me, thank you, I hope you like it 😄😁
Reveal Spoiler
2mth
view 0 replies

Can not tell if it was dropped or if the author has other real life issues preventing the novel from continuing for now. But the book is really good and has great character and world development so far.
4mth
view 1 replies

This has been a great story, the world building, the characters, and the romance. I am thoroughly enjoying everything that this story has to offer and I cannot wait to read more.
10mth
view 0 replies

I usually stay clear of authors who drop novels bc they tend to repeat. Story was decent but not god tier as some of reviews say. mc is mediocre but not beta so didn't bother me much. The world background and character design are a bit average. Good writing quality and decent story development, unfortunately story was dropped so no further development.
11mth
view 0 replies

This novel is really fun and interesting to read. The mc knows what he is doing and is pretty mature. The story concept is also interesting. The skills are kinda creative and unexpected. The plot isn't rushed either. The only downside is that the updates are pretty slow and there aren't many new chapters. It might be frustrating for some people
11mth
view 0 replies

This is such an awesome fic, although it has the same problems like any other fic, but the story is just that good so you won't mind that problem. For me personally, i enjoyed and hope the author to keep writing it more
11mth
view 0 replies

I must say, I am impressed by the novel even though it has gone in a direction I didn't expect it to be. thankfully author wasn't hasty and twisted the plot into something exciting. Looking forward to more.
1yr
view 0 replies

all in all a good story but it has conjugation and grammatical problems. ps to the author : pls don t go calling some abilities kronos eyes and kronos body then changing them to dragon eye and dragon body.
1yr
view 1 replies

This a really good novel and has a unique way of writing and a system different from other. I feel like it blends together a lot of books to create a good one
1yr
view 0 replies