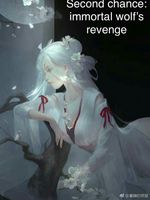 Abused, used and then discarded when she has no purpose, a young girl named Snow due to her silky white fur was integrated into the white snow was left to die a lonely death. Believing this was the end, believing her most looked up parents were actually using her, despite seeing how they always favoured her sister despite not born from the same mother. Snow was too naive, she believed that as long as she provides benefits to the Liu family, she would finally gain the love of her parents but she was thoroughly mistaken.

Her cultivation pearl was taken, her appearance was ruined, her life was coming to an end, the snow slowly enveloped her into the coldness, the time she closed her eyes, believing if there was a next life, she would live differently, a second life where she would gain revenge, a life where she would let everyone see that she is powerful and not a commodity that should be played around with.

And like a dream, she wakes up in this run down room with the reminent of her past life in the 21st century. And as if the gods has heard her plea, she was brought back to the time she was still a teenager of the age of 10, the time before the death of her brother. However the only difference was that there was an entire different entity that lives inside her as if like a system but in the form of a cultivation god who speaks to her as if they have known each other for all eternity. Pretending to be the same at the outside within the dens of these devilish family but in secret trains with all her might till the supernatural academy enrolment which is in 2 years time where she would show everyone her strength but before that day comes, she needs to train and become stronger and ensure that she doesn't die, keeping herself low-key and out of the business of the Liu family. She was slowly but shortly forgotten in the abandoned Yin house.

Follow the journey and see how Snow would gain her revenge and what changes follows with a second chance of life.

This is the first time I’m writing something to do with Chinese cultivation so if there is anything wrong, please comment, it would be a great help. Thank you

(Note: any poison or treatment method are all made up and through imagination so if you never heard of it then just note it's not real).