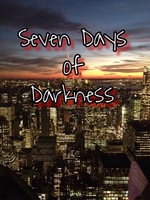 Harper is a famous journalist who met a strange beautiful woman named Nadine when he was 12 years old. He met her at the fountain in the backyard of the church. Since he met her, he always fond to see her that’s why he often went in the Church’s backyard. One afternoon, Harper went back in the fountain, longing to see her, but she didn’t came. And there, he met another girl same his age named Stacey, they got acquainted and be friends. He told her about the strange woman that he met in the fountain. While the two were happily talking, suddenly a priest approached them and he said that he often see them playing and talking in the backyard. Then Harper told the priest that because he is waiting for a teen age girl named Nadine. The priest was stunned when he found out that Harper saw her, and there he told them about the secret of seven days of darkness. 12 years later, Harper became a famous journalist at Daily Chronicle. One day, Stacey emailed him that the seven days of darkness is near. Harper didn’t believe it anymore, until one night he saw the sign, he saw Nadine again with her unchanged beauty. And there he spread the news about the seven days of darkness to warn the people. But only few believes in him. In the middle of the doom, he was stranded in the convenience store with Stacey and seven other strangers.