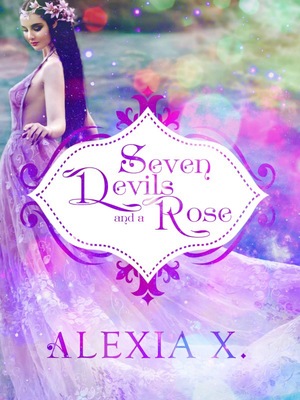 Chapter 1: The Magic of the Aurora Light - Part 1

I never liked getting my hair cut, but in this case, I would have to make an exception. After all, it was getting to the point of being unmanageable, the length reaching my waist. Not only was it hard to shampoo, but the fact that it was always getting in the way when I was experimenting with my cooking didn't help matters, either.

Flicking the long, dark strands away from my face, I strolled along the seaside street of St. James Island, which was a very beautiful place. Clear, blue sky stretched endlessly beyond the horizon, with picturesque, white sand beaches that promised many tourists a lovely relaxing holiday, especially during the summer. Not to mention the charming little town lined with antique shops and beautiful buildings that dated back to the early seventeenth century.

Once again, I simply couldn't believe I was here. Of course, this all had begun with Mom, who had wanted to run her own little business in the form of a writer's retreat while I started my freshman year at university. As she had stated, her little elf was leaving the nest and Mom needed a diversion. Then a few months in, while I was doing my best at settling in on campus, making new friends, and rushing around going to classes, Mom called and told me they had found a place for sale, which resided on a small island along the East Coast—just off the state of New York. I was overjoyed for them and naturally couldn't wait to visit the new place, especially when Mom had described how mysterious and magical it was.

Now here I was. This island would be my new home for the next couple of months before I returned to university for my sophomore year. That was if I had managed to pass all the exams, which I wasn't very confident about.

It wasn't long before I spotted a pretty little building amongst the others, which housed a gift shop on the ground floor and the hair and beauty salon on the first. I passed the gift shop and walked up the steps toward the first floor. On the landing, I noticed the sign that said St. James Beach Hair and Beauty Salon with an arrow pointing which way I should go, which was straight up. I followed the sign and, a few seconds later, opened the door.

Ding-dong. The door announced my arrival. Immediately, a woman came to greet me.

"Hello there. How can I help you today?" she asked sweetly, a bright smile about her lips.

I moved my long hair behind my ear and said, "I have an appointment for a haircut and body wax at three today."

The woman nodded and checked the computer screen. A moment later, she asked, "You're Alfie Nak…" She paused and tried again. "Alfie Na-ka-mu-ra?" She was obviously having difficulty pronouncing my last name, which was not unexpected. Most people had difficulty, unless they happened to know how to speak Japanese, like Mom and of course Dad, naturally, since he was native Japanese.

And of course, my first name. Alfie. It was obviously a boy's name, and I was certainly not a boy. Then again, when you had a pair of otaku as parents, what would you expect? Dad, an Asian man with jet-black hair and dark-brown eyes, loved anything epic fantasy and elves. In fact, he had countless collections of posters, digital art, and figurines featuring elves, which took up the majority of the space in his study and parts of the library in our new manor here on the island. That couldn't be helped since he was a fantasy author and was doing very well with his books ever since he had started his writing career some twenty years ago.

When I came into the world—bundle of joy that I was—I was immediately his little elf and I was told that Dad had decided I would be given a name that had something related to an elf. Mom, too, who was an all-American beauty with honey-blond hair and bright-blue eyes, decided to go along with him since she was an anime and manga fanatic who was in love with the fantasy genre as much as Dad, who loved to write them. And since she had high hopes that I'd become as smart, alluring, and magical as an elf—as if that were even possible—Alfie was an obvious choice.

The woman chuckled and said, "You do look a little bit like an elf." She paused and added in a hurry, "I meant it as a compliment."

She introduced herself. "I'm Joyce, and I'll be doing your facial and waxing for you when Claire is done with your hair."

I nodded. So she was Joyce and the one currently cutting another client's hair was Claire, Mom's new friends here on the island.

As I nodded, she chuckled. "Your mom talks about you all the time."

"Does she?" I asked, feeling slightly embarrassed. I hoped Mom hadn't told them how much I liked cosplay, especially when I dressed as a cute elf. I believe we are an elf fanatic family.

Joyce nodded and then told me to take a seat, which I did and made myself comfortable. I noted the hairdresser, Claire, was busy expertly chopping off hair as her fingers moved about this way and that. Those hands looked as though they were dancing in the air, and I was mesmerized. It wasn't long before the woman's curls were shaped into something that was unique and beautiful.

I was just picking up a magazine to read when Joyce walked past me and said, "Claire won't be long."

Seven Devils and a Rose is one of my favorite series because it's a reverse harem. LOL! I love writing scenes when the heroine interacts with the heroes, of which there are seven in this one. Yes! There are seven, hunky men in this series to let your imagination run wild.

I hope you guys will enjoy it, too. Please note that in my reverse harem series, the girl will always get all the guys because she can and it's fun (especially for me when I write/type/create the scenes).

If you can't wait to read more and want the whole book now, you totally can. It's available on Google Play, iBooks, Amazon, and B&N. Just check out my website at https://www.alexiaxbooks.com/romancebooks or google Seven Devils and a Rose by either Alexia Praks or Alexia X (both author names are me).

Otherwise, I will update daily here on Webnovel. ^_^