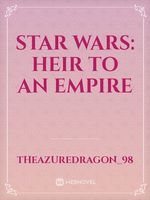 Star Wars: Heir to an Empire

Shannon SeaFire, Empress of the Rebellion Empire, a territory beyond the outer rim of the Galaxy. With the Galaxy in a state of peace after the Galactic War, the young Empress decided to travel across the Galaxy to explore. Her excursion was brought to an end prematurely due to being spotted by the legendary mercenary group known as the Knights of Ren.

Shannon is a Sorcerer, a creature that can transform between a majestic Dragon and a Human with the wings and tail retained. She is a biological Elemental Purple Dragon hybrid, meaning she has access to all the traditional elements and Purple Fire; a devastating flame born from the Dark Side of the Force.

As this power and potential surpasses the Knights, Snoke gives Ren a peculiar task; join forces and create an heir. This task is readily accepted by his Knights, six masters of their own weaponry, all powerful Dark Side users.

' ' thoughts/ speaking through the force