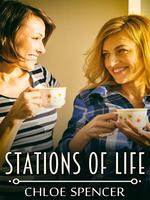 Juniper “June” and Eloise have been together since they were fifteen, and have been married for four years. When they first became friends, June fell in love with Eloise’s bubbly personality, but now, she can only see her wife’s flaws: recklessness, impulsiveness, and the ability to make any situation more complex than it should be. Fed up, June declares she wants a divorce and leaves.<br><br>But the universe has other plans for her.<br><br>When June boards the light rail home one day, she falls asleep and wakes up in a realm comprised of her own memories. Unable to escape, she’s guided by a younger version of herself, who she calls “Young June.” Although June is certain she wants to end her marriage, her younger self tries to convince her otherwise by showing her major events in her history with Eloise.<br><br>But as their journey continues, June grows more stubborn and fails to recognize her own mistakes. Will she ever own up to the things she did wrong? Will she want to reconcile with Eloise? Or is it too late?