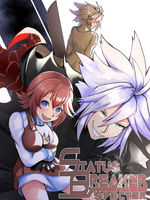 On the Year 20XX, Ad Libitum was formed to exterminate Nightmares that were appearing within the city using a group of Breakers called Dream Eaters to maintain peace and order without being ordered around by the government called Sumeragi.

A level 0 little girl named Philuffy Earhart, who was born with the inability to level up, helps the doll named Specter in search for his owner called 'Innovator' by using Specter's power to gain a human form and protect her from foes but everytime he takes damage, she will receive it instead and the Level 1 boy, named Shin Kizuna came to help on her quest. Interestingly, he is known as the Status Breaker who can manipulate his stats using his Gear Ability called 'Fear Eater' A skill that steals fear and turns to strength in exchange for inability to level up.

But their journey was not rather an easy one, when a group of people possesses monstrous stats came to hunt down the innovator.