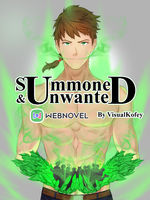 Vincent lost his parents at a young age to an unknown infection that mysteriously spread in a large city which was holding a massive worldwide event. He survives but he becomes mutated by the infection. In the end, he blamed himself for his parents' deaths because he was the one who insisted on visiting the event.

Years later, Vincent meets with an infected survivor named Kevin, who helped him heal his heart. However, not all stories have a happy ending. Unfortunately, Kevin would pass away ten years later and leave a book with heroic tales as promised behind.

However, the book wasn't as it seemed and after Vincent reads the book, it teleports him to the world the book depicts. A world of sword and magic with a horrible twist. Heroes are referred to as invaders, so people hate, persecute, and kill any otherworldy hero summoned to their world.

As an oddity to the world and possessing an oddity residing in his body, Vincent becomes the only person in the world to awaken two classes. A Hero and a Mutation class. The more retainers he acquires, the stronger he becomes through mutation.

This is the journey where Vincent starts from naive to brave, zero to a hero. From a single young adult to a harem king, from a nobody to an important person to many.

As Vincent tries to survive with people he can trust, he would receive many titles such as Harem King, God, Miracle Worker, Hero, Husband, Master, King, Monster, and many more.

Multiple questions will haunt Vincent's thoughts while living in the new mystical and strange world.
Go back to Earth?
Protect his new loved ones?
Find the mystery of the teleporting book?
Or create a haven where he and his loved ones can live in peace?