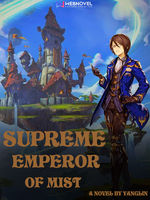 Lan Xian Di aka Supreme Emperor of Mist
-
It was a cultivation world where the strong preys on the weak. The cycle continued, but neither factions nor dynasties managed to overcome the corrosion of time.
-
Qin Lan was a youth in his fifteen years old. Playful but socialized well with people of his age, this third young master was well respected wherever he goes. But little did they know that he's considered trash when it comes to cultivation.
-
But everything changed when he steps forward to fight for a righteous cause and protecting his household servants.
-
His memories before his current reincarnation came back.
-
He was the Sect Leader of Kuangshan Lu Sect. He's also the founder of the Misty Sea Eternal Dynasty. Furthermore, he's the third Supreme Emperor in his most glorious era.
-
And once again, the forgotten Supreme Emperor of Mist shall make his way towards the top of the cultivation world once more.

Credits to Ripcorez for the amazing Front Cover.