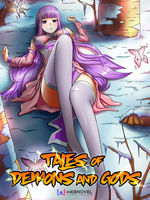 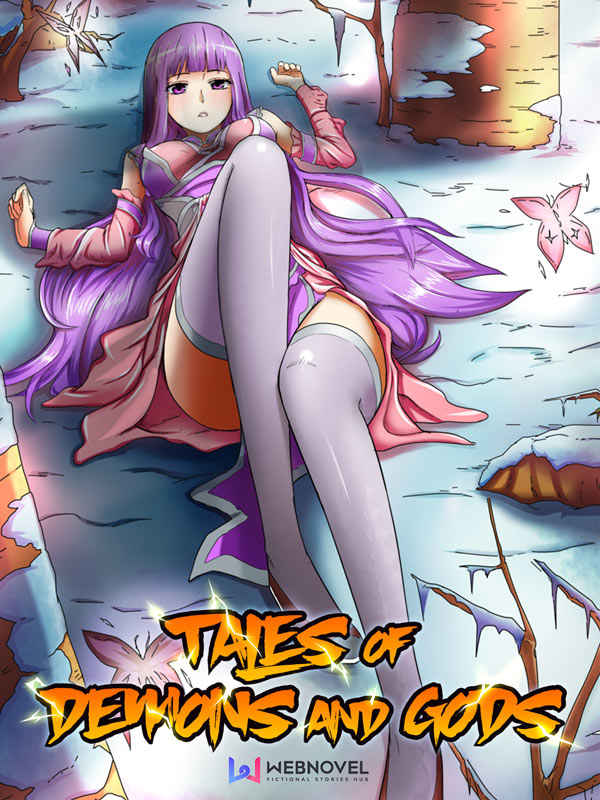 Tales of Demons and Gods

On the colossal St. Ancestral Mountain range, sunlight shined through the gap between the mountains into the deep canyons. On the hillside beside the valley, some snow remained.

Even though it’s already the early summer, the snow has yet to melt. The cold here is exceptionally long. The roars of beasts can occasionally be heard.

On the surface of the valley stood a magnificent city.

The world outside of the St. Ancestral Mountains has been occupied by the beasts. The people living in the mountain range have not contacted the outside world for hundreds of years.

The people who live in the city are unsure of the situation of the outside world. It’s been recorded that at the most glorious period of mankind, having thousands of Legend rank Fighters and Demon Spiritualists, the humans established many empires in the vast continent, but those empires have been wiped out..

The city, due to being stealthily located geographically, was well preserved from the Age of Darkness. They would occasionally encounter attacks from powerful Snow Wind Beasts within the St. Ancestral Mountains, however, after going through numerous devastating conflicts, the city was be rebuilt again and again.

These motley walls were an indomitable monument.

This city is called Glory City, and it is a symbol of hope for humanity.

Over thirty students are sitting down and are awaiting to listen to the female teacher as she imparts her knowledge. The students are a bunch of Fighter Apprentices. They are Glory City’s Holy Orchid Institute’s students.

“I heard that the new teacher, Shen Xiu, is one of the Sacred Family’s 3-star Silver rank Demon Spiritualists!”

A few students were discussing softly among themselves.

The attention of the students was focused on the teacher. She had a tall figure, was wearing a lavender dress that wrapped tightly against her body, giving an emphasis of her perky chest. She had a pair of slender, white legs, and wore exquisite make-up that made her look beautiful and elegant. Her eyes were full of pride and arrogance. The Sacred Family is one of the three Major families of Glory City. Because she is of noble birth, and a 3-star Silver rank Demon Spiritualist, she naturally has the capital to be prideful.

As a 3-star Silver rank Demon Spiritualist, she wouldn’t normally come here to teach. She only agreed to because her nephew is in this class.

“Demon Spiritualists and Fighters have five different ranks, which are: Bronze, Silver, Gold, Black Gold and Legend rank. Each rank is then divided into five levels, from 1-star to 5-star.

“A Demon Spiritualist is above a Fighter. We are a truly noble existence. A Demon Spiritualist can form a soul realm within their dantian. They have the ability to integrate a captured demon into their soul realm and then merge with the demon in combat. This allows them to possess matchless strength, which is far above the strength Fighters could compete with.” Shen Xiu raised her chin and spoke arrogantly, “Just like me, my demon is a Scarlet Flame Fox.”

When it came to her cultivation, the pride on Shen Xiu’s face became thicker.

Shen Xiu’s words caused a group of students to be amazed. Gold rank Demon Spiritualists are existences beyond the reach for most of them.

As Shen Xiu continued lecturing on the stage, Nie Li was sitting in the back row. His mind was in a trance as his soul floated around.

After a while, Nie Li slowly opened his eyes. He couldn’t help being confused by the scene in front of him.

“Where am I?” Nie Li quietly asked himself.

He was utterly shocked as he realised that his hands became smaller and his skin became a lot more tender.

Shen Xiu was on the stage, talking nonstop. Nie Li clearly remembered that this was the year he joined the institute. The teacher lecturing was a 3-star Silver rank Demon Spiritualist and was extremely arrogant. Because of her, Nie Li was unwilling to learn for quite sometime.

“I was actually reborn?” Nie Li was deeply shocked. He remembered being surrounded and attacked by the Sage Emperor and six Deity rank beasts and died in the battle. It seems his soul was reborn to the time when he was thirteen years old.

Nie Li looked towards the side, and saw familiar faces: Lu Piao and Du Ze. These brothers that had shared life and death with him are alive, except their appearances were very immature.

And her, Nie Li looked towards the left. A few meters away from him, a beautiful flawless face came into his field of vision. Her name is Ye Ziyun. Although her appearance is only thirteen-fourteen years old, she already looked slender and elegant with purple coloured hair pouring down to her waist. She had arched eyebrows, and an intelligent radiance was seen within her eyes. Whenever she smiled, she would have deep dimples.

Although she looked a little childish, Nie Li knows that, when she grows up a bit more, she will be extremely beautiful and enchanting. She wore a silk white dress that gave her a kind of unspeakable elegance. In his previous life, Nie Li had a deep affection for her ever since he was a teen.

Nie Li was extremely excited to the point that he almost choked.

“I actually went back in time, is this real? Not a dream?” Nie Li asked himself as he severely pinched himself. The clear pain told him that this wasn’t a dream. Suddenly he thought of something.

Nie Li lowered his head and immediately searched for it, but could not find the Temporal Demon Spirit Book.

Nie Li could not believe that his rebirth, this mysterious phenomenon that happened to him, was not related to the mysterious Temporal Demon Spirit Book!

After seeing all these familiar faces, Nie Li drifted into his distant memory.

He remembered when Glory City was under the assault of the Snow Wind beasts. Glory City’s guardian, Lord Ye Mo, who was a Legend rank Demon Spiritualist, died in the battle with the beasts among hundreds of thousands of people. Only a few thousand survived and fled to the desert, east of the St. Ancestral Mountain range. During the escape, one survivor after another died in the desert. One day, they were surrounded by the beasts in the desert. Later that night, Nie Li and Ye Ziyun sought the comfort of each other’s soul.

That night, Nie Li had finally embraced the goddess in his heart with his arms.

Under the night sky, the silver moonlight became a hazy veil. Ye Ziyun’s exquisite physique, with her crystal clear skin that looked as though she was molded from a jade sculpture. They embraced each other with a mad passion.

If it wasn’t for the destruction of Glory City, and for the dreadful escape, he could never have gotten the favor of Ye Ziyun. He had ridiculously low talent and was from a declining family.

After that night, they encountered another group of beasts and in order to protect him, Ye Ziyun died by the hands of one of the beasts. Nie Li could never forget that moment.

After he experienced the life threatening attacks, Nie Li survived and walked out of the Endless Desert.

Although his talent was low, his survival instincts allowed Nie Li to travel throughout the Divine Continent. He came across many people who were fighting the beasts. He also came across many mysterious things, and of course that Temporal Demon Spirit Book. If it wasn’t for the book, Nie Li wouldn’t have been able to come back.

That mysterious Temporal Demon Spirit Book, actually brought him back through time!

He was brought back to before Glory City’s destruction. Before his parents, family and brothers death in the battle. Before Ye Ziyun’s death in the escape.

“Since I’m back, the heavens have given me another chance. I will not let the destruction of Glory City happen again!” Nie Lie said under his breath, gritting his teeth. He firmly made his decision.

He vaguely remembers that he should have just enrolled into the institute this year and he should be thirteen years old. Nie Li wanted to laugh happily, ‘I’m back, how nice!’

‘Sage Emperor, the next time we meet, I’ll slaughter you, and avenge my previous life!’

If it wasn’t for the destruction of Glory City, him and Ye Ziyun would be from two different worlds. It wouldn’t be possible for them to be together. Ye Ziyun was the daughter of Glory City’s City Lord, not to mention that her grandfather is the Legend rank Demon Spiritualist Ye Mo. Nie Li was from a family who was powerless and was declining. Both of them, in the midst of escape, built up deep feelings for each other.

When Ye Ziyun entered the school, no one in class knew her identity. Nie Li only found out about her identity later.

Nie Li belonged to the Heavenly Marks Family, which stood at last place of the Aristocratic families. Although they have a little status, there is an astronomical difference in status when compared to the three Major families and the seven Noble families.

With Nie Li’s background, wanting to be with Ye Ziyun was simply impossible.

But, with a firmness that flashed across Nie Li’s eyes, since he was reborn, is all this of still an issue? Although his foundation is currently poor, with the vast knowledge from his previous life, improving his talent isn’t impossible.

“Nie Li, what are you smiling at?” Lu Piao asked, looking puzzled at Nie Li. He was wondering if he has crazy, since he was giggling by himself for quite sometime and was even staring at Ye Ziyun with a lecherous look.

“Just being happy! I’m happy to see you, good brother!” Nie Li stated as he excitedly hugged Lu Piao. It’s a habit from his previous life.

Lu Piao struggled. They’ve just started school not long ago. They were only acquainted for only a few days. They were not close enough for this level of intimacy.

Nie Li didn’t loosen his hug. He looked at Lu Piao seriously and chuckled “No matter what you’re thinking, in my heart, you’re always my good brother!”

However, no matter what, the words Nie Li said previously, made him feel moved.

Lu Piao looked at Nie Lie and said, “I know you’re one of the nobility in Glory City, but let me warn you: Do not have any ideas for that girl. Her identity is extremely mysterious. I heard that when she joined the institute the principal personally arranged her dorm.

“She’s my woman!” Nie Li declared, looking at the beautiful long haired girl not far away. His heart was exceptionally firm as he thought of that night’s passion. Nie Li couldn’t help feeling hot in his heart.

Nie Li suddenly remembered, he and Ye Ziyun are still only thirteen!

‘Ziyun, when will you grow up to become that beautiful, enchanting woman? I shall protect you and we will grow up together!’

Not far away, Ye Ziyun felt something. She turned her head and looked towards Nie Li. She gently wrinkled her brows, and thought that Nie Li must be a playful noble. Since the start of class, he has been unrestrainedly looking at her. If he dares to provoke her, she’ll not let him off easy.

Ye Ziyun didn’t want to make use her status to make friends, but that doesn’t mean that she’ll submit to humiliation when being bullied.