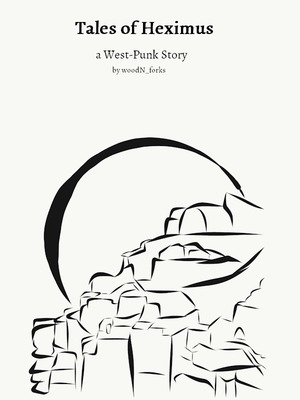 Sinking in the cosmic ocean, between the gulf of the Planetscape and the Big Nothing, past the outlaw planet, is the S.S. Amaun’s Chariot, being pulled down to the sandy bedrock of Heximus. This planetary tombstone, its deserts swallowing up 70% of its surface, the rest being devoured by scum and bandits, giant sand worms and sky-taken demons, is a lawless wasteland. Here, on the northern half of the northern hemisphere, at the small scrap town of Primer, mercenary adventurers find themselves stranded. The crash was quick, blinding even, yet not so blinding as the secret held by the S.S. Amaun's Chariot.

This story is based entirely on a homebrew D&D game, set on the Planet Heximus. The setting contains both magic and modern technology, but Heximus is dominated by Wild West culture. The combination of magic and tech has resulted in some aspects of technology reaching a post-modern level. As the game progresses, so will the tale I write for you.