TEMPORARY HIATUS: Methods To Save The Villain - Fantasy Romance

/ Fantasy Romance / TEMPORARY HIATUS: Methods To Save The Villain 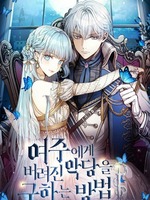 TEMPORARY HIATUS: Methods To Save The Villain

In my previous life, I served as a store manager in a clothing company, but I was reincarnated into a novel after my instantaneous death.

It was the beginning of my misfortune when I became a 6-year-old in an accident after trying to save the Villainous Duke, who was almost poisoned by the heroine. To make matters worse, the Grand Duke, who was willing to pay back grace, adopted me into the infamous assassin family.

The contract period is 3 years. I became the youngest daughter of the Duke of Eustrian at the end of the century.

“Do you agree to be the daughter of a monster for three years?”

I was afraid that I would die in the hand of a handsome villain with a small face. I put my hand on my chest and replied as solemnly as possible.

The head of the assassin's family, who will become my stepfather, stared at me with his chin on. Whether he liked my answer or not, a black-haired young man with arrogantly twisted legs twisted one side of his mouth.

“Young Lady?” (This was originally Youth but it’s kinda weird.)