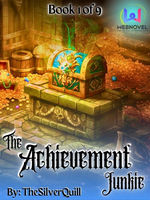 "Hurry up! Crypt Lord Duorda will emerge any minute! If you need to heal or swap equipment, now's the time," the squadron commander yelled to the hundred-man army.

Every player quickly checked their statuses and acted accordingly. Almost everyone clustered around the clerics and medics, waiting for their turns to be fully healed. In the meantime, they all checked their storages and began to switch armors and weapons, trying their best to counter the imminent threat specializing in death magic.

The squadron commander looked over his hundred-man army with pride before turning towards the ten assigned party leaders to relay commands. "Remember that we must be vigilant, be ready for anything."

"Oh, come on. Lighten up," joked the third party leader, boasting bulky armor and a war hammer bigger than his head.

"Quiet, pay close attention to everything," the commander was already scanning the army yet again. "You all know of the real threat we face. Didn't you check the achievement board this morning?"

Some party leaders were startled as they remembered, others just looked around and waited for someone to explain. The seventh party leader spoke up, "That fiend only has a single achievement left."

"What!?" the ignorant third party leader yelled as he finally caught on. "You can't be serious? But that's imposs—"

"It's true," the squadron commander confirmed. "Any guess as to what his last one might be?"

The bulky party leader shrunk back as he guessed, "None for all, all for none?" When the commander nodded, the tank party leader ran back to the others yelling, "Hurry up! Don't waste any time!"

Suddenly, dark mist shrouded everything and everyone, circling the tomb and marking the boss's arrival. Unlucky for everyone there, the randomized timer favored the dungeon boss and caught everyone off guard.

"Get in formation, what are you doing!?" the commander was furious at the terrible timing but could only move the plans forward without a second thought. "Tanks surround him! Archers and mages form an outer ring! Clerics and medics hide behind the archers and buff our soldiers! Stay in mid-range, anything long range can be countered by the black mists!"

Everyone followed orders and listened to their respective party leaders as they took control and assaulted the risen crypt lord. The grind to dwindle the boss' health went fairly smoothly as the boss reached critical health, where he'd be buffed and his attack's became randomized.

"Careful everyone! Get closer and avoid the mist! It's toxic and will drain your HP!" the commander reminded everyone of Crypt Lord Duorda's crit abilities. "Every attack he makes will drain your life and heal him, so watch it!"

The tanks were running low on stamina and skill points, doing their best to keep the boss from moving. Clerics and medics worked overtime to replenish everyone's skill points and health, not focusing on anyone in particular but maintaining the general health of the squadron just above the red.

"Hey! What are you doing?" a medic party leader yelled at a medic that broke formation and ran towards the tank. Many people hesitated at the sight, resulting in a timing issue of the once steady stream of attacks. What caught everyone off guard was what the run-away medic was wearing.

The squadron commander's eyes flared in fury. He immediately turned his bow away from the boss and toward the mad medic. "Archers and mages shoot him! That's a full set of Leeroy Jenkins' Battle Plate, the legendary 'kamikaze armor!'"

All eyes were on the rogue medic and all sixty-five archers and mages aimed. Despite the tension, the tanks felt with the boss and the fear in the eyes of the squadron, the rogue medic wore a smile as he reached the inner circle and easily squeezed past the occupied tanks. He dove at the crypt lord and yelled, "I've done it!"

Before anyone could finish him off, the 'kamikaze armor' was activated. Bright white light flashed across each of the hundred players' screens, blinding everyone from the battlefield. Three seconds passed before it faded, and everyone was left staring at the desolate catacombs. Nobody was left, not even the crypt lord. All that remained were the boss drops, left freely for whoever passed by the boss floor next. The last achievement, "None For All, All For None," had been achieved.

"YEEEEEEEEEEESSSSSSSS!!!!!" Only a single gamer out of the hundred was excited beyond belief. "Finally!!! I did it!" Unlike the others, his screen didn't return to show him the empty battlefield. It cleared up to the now full achievement board. In bright gold, his gamer tag, Jack_J, stood at the top in spectacular fashion.

Seeing it in such a glorious fashion, he remembered how much more he preferred that character over his real-world identity, Jackson Jones the twenty-two-year-old high school janitor. With thousands of hours clocked in "A Hero's Tale," he genuinely wished to leave reality behind for his fantasies.

After a few minutes in awe of the achievement, he tried to click back to the home screen but wasn't able to. Instead, a highly decorated message from the game's creators covered the screen. Jackson read it carefully, anticipating some insane gift to be given.

"It is our honor to congratulate you Jack_J the Achievement Junkie for your accomplishments. Your countless hours of heroics have culminated in such grandeur that it is impossible to fully describe in words.

"As promised, we offer you this unique quest that will allow you to further dive into fantasy and escape your dismal reality. May you always adventure with heroics in mind."

At the bottom of the message was a button to open his new quest. Without hesitation, Jackson led his mouse towards it and clicked it eagerly. To his shock, he was being electrocuted by his mouse and computer. His muscles spasmed and his eyes flinched in pain. He could move away from the keyboard and could only watch as his screen faded to white and lit his entire room, blinding him from the old bowls of instant ramen and soda cans scattered across the worn-out studio apartment.

It wasn't clear when Jackson came to, he slowly opened his eyes and rubbed his face awake. Slowly he looked around himself to realize he was no longer in his apartment, or alone. He was laid out on a cold stone floor in the midst of what looked like a summoning circle from "A Hero's Tale." Outside the circle stood a small crowd of people with amazement in their eyes.

"What the..?" mumbled Jackson as he slowly stood up.

Hey readers, this is your friendly, online author checking in. I came back to write this note after already having written over 500 chapters. First off, know that this is the 1st story of 6 webnovels within a shared, connected multiverse. With that aside, here are some other thoughts on what to expect in this story, both pros, and cons.

-The MC is a "JERK" at the beginning and is inexperienced with women at the start, but he learns to trust others and be a team player too. Don't you want an MC that grows?

-I rushed out some chapters, especially near the beginning, with little to no editing

-As an author trying to get better everyday, it took a while for me to figure out more about my writing style. But I believe this story REALLY starts picking up around chapter 250 and never stops the hype train from then on.

-This is Book 1 of 6 within a shared multiverse, which readers have dubbed the "Quillverse". I know I said this already, but it deserves repeating. All 6 stories will depict different factions, regions, and cultures of the universe so that the final story can travel the multiverse and connect all the dots for a spectacular conclusion

-The MC grows. I refuse to have a flat MC

-This world is far deeper than the first chapters let on. Get deep enough and you'll discover that Jack will end up traveling to the majority of the 32 nations in Kartonia and visit one of the gods governing a portion of the universe. Just saying.

-I hate predictability and will always try to spin or flip tropes and cliches. If you can predict the twists and turns here, then good on you!

With that being said, thanks for tasting the first chapter. And with those pros and cons in mind, I hope you can forgive my many flaws as an author. I'm human and growing better with each chapter. Have a nice day! Oh, and remember that you're amazing! Have a high-five